Neoliberalism to push Brazil off the cliff optimistically

Brazilian President Dilma Rousseff refused to attend the opening ceremony of the Olympic Games in Rio. She has been removed from power for six months and remains outraged by the impeachment that was organized by neo-liberals. Their media outlets trumpet about the "optimism" that has gripped the masses against the backdrop of an economic recovery in Brazil. Judging by the example of Argentina, Brazil's neighboring state, this optimism will not last long. 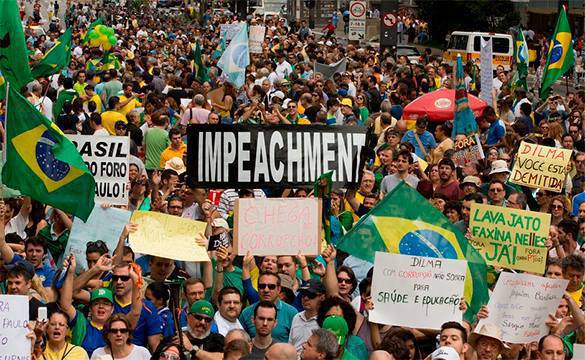 The vote for the impeachment of Dilma Rousseff will take place on 20 August. To finally remove President from office, two-thirds of Brazilian senators will have to support the initiative. If it happens, acting head of state, neoliberal of the Brazilian Democratic Movement Party (PMDB), Michel Temer, will stay in office before the elections in 2018.

Michel Temer's program for the reconstruction of Brazil

Surprisingly, two months after Dilma Rousseff's removal from office, the Brazilian economy started showing signals of recovery, even though it was staying in recession during her presidency. The inflation rate stabilized, the investment climate improved, the Brazilian currency rose in value. Temer's supporters say that the economic rise became a merit of his political course. Michel Temer is confident of the future of Brazil, and Valor Econômico website presented his program about the "reconstruction" of Brazil ("Para reconstruir o Brasil") that proclaimed the restoration of full employment and the return to the previous level of investment.

The program says that the Brazilian government plans to attract national and international investment in such areas as urban transport infrastructure, sanitation, oil and gas sector, energy and logistics. State bodies are said to lease land or companies to foreign investors. State-run company Petrobras is said to be the first on the line, the initiator of the impeachment, ideologist of Brazilian neoliberalism, Dilma's rival in the election of 2014, Minister for Foreign Affairs in Temer's government, José Serra said. It is already clear that this man is wiling and able to take Brazil away from the position of a global player to worship the United States and the European Union.

The privatization will be conducted along with budget sequestering, cuts in social programs, increase in the tax burden, redistribution of resources to win allies and a pension reform. According to O Globo, higher education will no longer be free of charge.

What Temer's team refers to as the improvement of income redistribution policy (to focus assistance on five percent of the poorest layer of the population), in fact stipulates for the reduction of a very large amount of social programs, professor of economics at UNICAMP Guilherme Mello told the Vermelho website. In Brazil, the next ten percent of the population are impoverished as well, and millions of people will be deprived of assistance under social programs, the economist said. The programs "Fome Zero" ("No to Hunger"), "Bolsa Familia" ( "Family Budget") and others have had their budgets halved over the years of the rule of the Workers' Party (PT). At the same time, the population of Brazil has grown by 40 million people. Infant mortality has decreased, life expectancy has increased, the public spending on education and health care has grown.

Before the above-mentioned programs are canceled, private entrepreneurs make injections of optimism into the Brazilian society. However, it was not Temer, who contributed to the implement of the Brazilian economy, Dilma Rousseff said in an interview with Rádio Educadora. "All fundamentals of the economy were laid during the time of my government. No one can restore anything in two months. Brazil has 376 billion dollars in reserves. This amount has not been saved in two months - it has been done during my presidency and during the presidency of Lula. For this reason, the world may cough, but we will not have pneumonia," said Dilma. According to her, the problem is about unfair political struggle, as certain forces take effort to discredit the policy of Dilma Rousseff in national media by creating negative opinions about the Brazilian economy.

The neoliberal rule will force Brazil experience privatization, economic reforms and social policies under the banner of increasing consumption. Yet, privatization causes a temporary improvement of the investment climate and increases the number of jobs. In the long term, privatization always makes the final product more expensive, leads to decrease in consumption and a cuts jobs in privatized industries. To crown it all, the inflow of investment in declining economies is caused by the depreciation of national currencies and the devaluation of national assets. The Brazilian, as well as the Russian economy, will be recovering with the help of risky investment, regardless of who stays in power.

What have the neoliberals done in Argentina?

Six months of neoliberal policies conducted by Argentine President Mauricio Macri have increased the number of poor people by five million people, a study conducted by Telesur said. The number of people living in poverty has increased by 35 percent compared with December of 2015, when Macri started to implement his reforms. The main factors that led to the increase of poverty include an exorbitant increase in rates on electricity, gas and fuel. Food went up by 30 percent, the inflation rate has not stabilized. About 1,000 people lose their jobs in Argentina daily. Congress proposed a law to protect employment, but the president vetoed it. Brazil ought to look at what is happening in Argentina not to fall off the cliff.