After an official meeting with the Ukrainian authorities Victoria Nuland, the US State Department curator on Ukraine, met with MPs of the Ulrainian Parliament Verkhovna Rada. There she spoke without diplomatic ceremonies, as Victoria Voytsitska, member of the parliamentary faction Samopomich Union (Self Help) revealed on the official site of the party. For pro-American Kiev the news is bad. 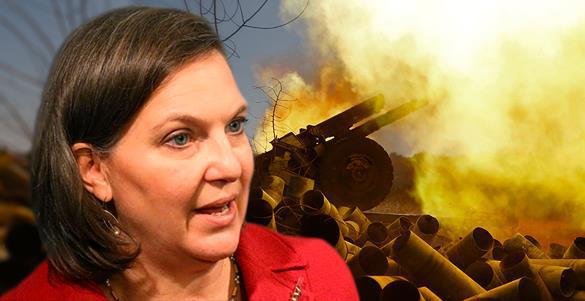 Rhetoric of Samopomich amazes with its absurdity. If the territory is "occupied" as they assert, how can someone else except for "occupiers" hold elections there? But the Ukrainian politicians don't bother with verbal incidents, as with any other too.

"The US calls on Ukraine to implement the Minsk Protocol first, and namely hold elections in the occupied territory, grant amnesty to terrorists and give Donbass a special status," Samopomich stated.

The Minsk Protocol should be implemented until the end of 2016, there is no alternative, and elections in Donbass should be held in July. In this case the West promises to extend sanctions against Russia for 9 more months. "Although Minsk is "bad", Ukraine agreed upon it as a state," the US Assistant Secretary of State said.

And what does Samopomich offer in response to Nuland's demands? "Ukraine should recognize territories to be occupied, while Russia to be an occupant country, regardless of whether the sanctions are lifted or extended.

Taking into account "patriotic" passion of Rada, a question occurs. Will the Parliament implement orders of the "consolidated" West, and what is more within the shortest time?

Assistant Secretary of State though arrived in Kiev after an informal meeting in Hannover with leaders of Germany, the US, Great Britain, France, Italy. Most probably, the answer will be "no", despite Poroshenko's efforts, as it requires new amendments in the Constitution and 300 votes approving it.

And the current parliament hardly voted for shift of the PM (at the tenth attempt). Nuland outlined results of such acts: Washington will lift sanctions from Russia and leave Ukraine. And such a decision has been already taken, political scientist Rostislav Ishchenko believes, it can be confirmed with output of anti-Ukrainian materials in mass media, the film Ukraine: Masks Of The Revolution, and the BBC film on the Malaysian Boeing downing over Donbass.

"The West leaves Ukraine. It will continue to fight against Russia, but in other places, in Syria, Africa, Asia, and with other means. And it leaves Ukraine because the "tool" turned out to be worthless. It is evidenced with all these films which are shown, books, articles. The West should change the "stick" it fights against Russia with, that's all," Rostislav Ishchenko claimed.

Ukrainian public figure, solicitor Tatyana Montyan has also spoken about it. "The US has disenchanted with Ukraine and does not know what to do with it. Someone should take responsibility over this territory, which used to be a sovereign Ukraine, but I don't know who, it will be clear after elections in the US. America showed that it is not able to manage with this territory, as it does not have the slightest idea how it works here. I believe they will break us and return to Russia," Montyan claimed in an interview with Pravda.Ru.

But here is a question. Does Russia need Ukraine in its current state? "Russia will always need Ukraine," Nikolay Azarov, former PM of Ukraine told Pravda.Ru. "Now there is a definite artificial crisis generated by a coup d'etat and anti-Ukrainian forces coming to power. As soon as sound patriotic authorities appear, relations will be restored. They will be completely restored and will be developing, as it is in the interests of both Russia and Ukraine".

Azarov believes that the US does not leave Ukraine. "Nobody dumps it, there is a policy, and today this policy catches the US Administration strategy, namely implementation of the Minsk Protocol," politician said.

It should be noted that the US leaves a conquered country if only it manages to get some profit from it for its companies. Then they leave chaos there in order to annoy an adversary. But one can still profit from the Ukrainian land and its agricultural potential. One can dare to suppose that in its case the American Administration will initiate early elections to the Parliament, depict a loyal parliament which will carry out federalization of the country with the following de facto taking it to zones of influence.

Author`s name Галина Тычинская
14:14
Kyiv's largest thermal power plant damaged in Russia's rocket attack
19:39
Putin pays visit to Crimean Bridge two months after explosion
18:32
Russia strikes Ukraine's infrastructure facilities for 8th time
16:11
Retired US intelligence officer: Russia will win in Ukraine in summer of 2023
15:56
British mercenary: Winter cold in Ukraine came as a shock to us
15:31
Moscow responds to EU's decision to cap prices on Russian oil
14:52
As many as 2,500 dead seals found on the coast of Caspian Sea in Dagestan
14:11
Three household gas explosions occur in different parts of Russia in one day
23:35
Putin keeps his promise and presents impressive gift to China
16:30
Armed Forces of Ukraine strike transformer substation in Zaporozhye
UK and USA could be part of drone attacks on Russian military airfields