For USA, Russia will always be threat No. 1 and no reset buttons can change it

The outgoing  week was darkened with a series of terrorist attacks in Brussels. As was expected, the Islamic State terrorist group claimed responsibility for the attacks. In Brussels, terrorists killed 34 people. Pravda.Ru talked about the current state of affairs in the field of European security with former employee of Alfa special unit Igor Shevchuk. 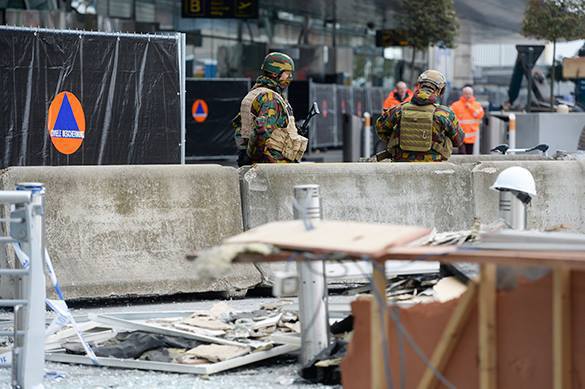 "What can you say about the attacks in Brussels?"

"It is unclear why special services lost the attacks and could not prevent them. There were many military men on the territory of the airport, where the explosions occurred, which means that special services were working there, but they missed the attacks. I don't know why. It was said that the attacks came in response to the arrest of one of the terrorist leaders, whom they could not find for quite a long time too."

"That is Abdeslama Salah, who was arrested last Friday."

"His whereabouts were limited to one particular area - they did not have to chase him across all of Europe."

"There are no metal detectors either in the Brussels metro or at the airport. Can special services work effectively without assistance from the population?"

"There is a certain circle of responsibilities and tasks that special services follow.  People's attitude to their work should in no way affect professional activities of special services. I do not understand the Belgians after what happened in Paris. Their attitude to this is very  short-sighted."

"Some residents of the European Union fear that the terrorist attacks in Paris and in Brussels threaten their notorious liberal freedoms. I was very surprised that they do not link the unprecedented influx of refugees in Europe to the attacks."

"One should try to understand the cause of the influx of refugees. The prime reason for it is the "enforcement of democracy" in the Middle East. Naturally, such a massive flow of refugees has brought terrorists to Europe as well. They already operate as an organized group, and they are ready to conduct terrorists acts in other cities of Europe."

"German radio station Südwestrundfunk, citing police reports, said that Abdeslam allegedly had three Syrians who had arrived in Germany as refugees. It was also said that there were two Belarusians among them."

"All this information has to be double-checked. I know that in Germany people are highly concerned and worried about the refugee crisis. German parents have to take their children to school and back now, although they did not even worry about their children going to school alone before."

"The head of the Security Service of Ukraine, Vasily Gritsak, assumed that Russia could be involved in the terrorist attacks at the international airport and metro stations in Brussels. Russian Prime Minister Medvedev called Gritsak a "jerk." What do you think of the words from a colleague of yours, the head of the Ukrainian Security Service? To which extent is he professional?"

"Ukrainian officials make a great deal of statements that require comments from  psychiatrists. And it's neither funny, nor sad."

"The United States claims that Russia is the largest global threat, while terrorism is the sixth largest threat, according to the Americans. "

"Well, we are one of the leaders now. Two years ago, Obama's list of threats was as follows:  terrorism, Ebola and Russia. We were on the third place."

"People become hostages of their politicians. After all, Brussels is the capital of the European Union, not only of Belgium. This is where NATO is headquartered, where many European and international institutions are located."

""Indeed. Terrorist attacks in the United States are also possible, especially against the background of the pre-election race in the country."

"As for the Boston bombings in the USA, Russian special services warned the USA about the possible attacks, didn't they?"

"The situation in the story of Tsarnaev brothers is quite vague. Near the place of the explosion, glass doors and windows were left intact. A paper bag did not even move a bit after the blasts. One and the same people were photographed in different places with various degrees of blood stains on them. It appears as if they were actors. A couple of hours later, there were no traces of blood left there - nothing. All was washed away so quickly - it looks very unreal. Finally, the actions of special services look very inadequate as well. What was the point to shoot one of them? Did they want him dead? When a witness can say something that must not be said, this witness is killed - that's it.

"Too many strange things in the Boston case? What about the 9/11 attacks on the WTC and the Pentagon?"

"It was a great human tragedy, as many innocent people were killed. Yet, if we cast this tragedy aside, it becomes obvious that the goal of the attacks was to find a reason to invade Afghanistan. A defense company received an order the following day or even the same day."

"The story with the crash of the Boeing over Ukraine appears to be from the same category of crimes."

"Absolutely. Unfortunately, not only in Russia, but all over the world, people do not think analytically anymore. They do not try to analyze such major events. A while back, the center of terrorist attacks was in Russia. Now it is the European Union - Paris and Brussels. Is it incidental? Some may giggle and say that I am paranoid to see spies everywhere. I want to remind such people of the spy scandal that we had a while back - the spying rock scandal. It appears that such things will be left in the past, but they are still in use today. There are spies even in student exchange programs. A young man can be an agent of US secret services, who comes to Russia as a student, but he collects information here instead. Veterans of US special services openly say that even if they managed to break up the Soviet Union, Russia will remain America's No. 1 threat for good. For them, all these statements about "reset buttons" are nothing but a bunch of lies to distract attention."