An unprecedented scandal is gathering steam in the relations between Russia and Great Britain. The Russian Federation Federal Security Service (known for the Russian initials as FSB) has disclosed four British intelligence officers working under the cover of the British Embassy in Moscow. The officers were funding several non-governmental organizations in Russia, the chairman of Russia's FSB press center, Sergei Ignatchenko said. 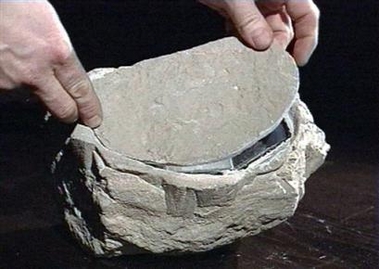 One of the four British officers, the first secretary of the embassy, Ignatchenko said, was supervising the work with non-governmental organizations, funding them on behalf of the Global Opportunities Foundation. “We have caught them red-handed for their secret work and for funding several NGOs. The goals of the funding will be thoroughly investigated,” Ignatchenko said.

The news about the special operation of Russian counter-intelligence surfaced on Sunday night in a TV program aired on one of the central television channels of Russia, Rossiya.

According to the official, the device was designed as a stone, outfitted with a transmitter inside. Footage taken from hidden cameras showed what the programme claimed were British officers walking past the boulder and surreptitiously downloading classified data onto palmtop computers. It also showed what were said to be local agents approaching the stone apparently to upload instructions for their top-secret missions. Unfortunately for the alleged spies, the rock's wiring was faulty. In one episode, an agent was filmed pretending to relieve himself in shrubs as he fiddled with its sophisticated electronics. In another, the rugby-ball sized stone was picked up and carried away for repairs.

Spokespeople for Russian special services said that it was the latest know-how of the British intelligence. It took FSB agents several months to conduct the operation, which eventually ended with an arrest of four employees of the British embassy. There was a Russian citizen detained within the scope of the operation.

Once the FSB agents detected the stone-like transmitter, Russian special services started searching for similar boulders all over Moscow. “The search was a success. We found another stone,” an FSB official said.

There are thousands of non-governmental organizations working in present-day Russia. However, only 92 of them are officially registered in the Ministry for Justice. The majority of them were established under the guidance of governmental and public organizations of the USA and its NATO allies.

The "spies" were named as Christopher Pirt, a researcher at the British embassy in Moscow, Paul Cronton, an embassy employee, Marc Doe, a First Secretary, and Andrew Fleming, a researcher.

FSB officers demonstrated several payment orders proving the transmittance of thousands of pounds sterling. The documents were signed by Marc Doe, a First Secretary of the British Embassy in Moscow, the political department. “The money was flowing every day. Here is a line that says that the payment has been made in cash. It was a targeted payment for the project to establish a network of public inspectors' schools in remote districts of Northern Siberia and the Far East. One may only guess what kind of inspectors they will be and what they will supervise,” an official said.

The journalists working on the above-mentioned TV program said that the US Secretary of State released quite a significant statement, which added an ironic note to the spy scandal between Russia and Britain. On December 7, 2005 Condoleezza Rice criticized Russia for the law about non-governmental organizations. Rice expressed the concerns of the US administration and said that the USA would like Russia to understand the importance of NGOs.

Meanwhile, the British Embassy in Moscow has not released any comments on the matter of the spy scandal. “No one is able to answer the phone at the moment. Please call tomorrow,” an officer from the embassy said.

The Foreign Office of Great Britain today said that the allegations made in the documentary were "surprising" but stopped short of saying they were untrue. It denied any such improper conduct by British Embassy staff, Time Online said. In London, a spokesman for the Foreign Office said: "We are concerned and surprised at these allegations. We reject any allegation of improper conduct in our dealing with Russian NGOs.”