The Basques join the Catalans

In Spain, parliamentary elections in local authorities in the two autonomous regions were held on October 21st. In the Basque Country (a year after ETA ended the armed struggle for independence), nationalists won in a landslide victory. However, Galicia supported the ruling Popular Party of Mariano Rajoy. It is not the victory, but the defeat that is indicative. 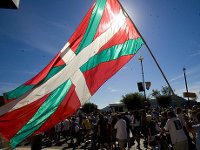 The Basque Country has an ancient tradition of separatism. This ancient isolated ethnic group has always paid special attention to its independence. For centuries, there was a system called "fueros", which recognized the central authority, but always stayed out of it. During the Franco years, who abolished the autonomy, the Basques created terrorist organization ETA ("The Basque Country and Freedom"). The organization has been struggling for independence since the mid-1960s led the armed struggle for independence. About 900 people fell victims of this war.

In 2011, the organization announced the termination of the armed struggle. It was transformed into Bildu Party. It was Bildu that got the votes of the Basque Nationalist Party (PNV) during the Sunday elections. These nationalist parties will take 48 (21 and 27) of 75 seats in the new parliament. The Spanish Socialist Workers Party (PSOE) won 16 seats, the ruling People' Party (PP) - only 10.

This marked a catastrophic defeat for PP that won a majority at the previous elections. Obviously, in the case of a coalition between PNV and Bildu, the Basque Country will soon join Catalonia in the persistent quest for independence. The quest is based on both historical and economic reasons. The Basque Country -is one of the most developed regions of the country. Its GDP per capita makes up 31,288 euros per year, which is higher than the average in Spain and Europe, according to the National Statistics Institute (the research was conducted in 2011).

Despite the "Great Depression", the unemployment rate in the 2.2-million- strong region is ten points less than the average in Spain - it makes up 14.5 percent. The Basques have reached such impressive results with the help of their own financial system that does not depend on Madrid. That is what Catalan leader Artur Mas had been trying to get from Prime Minister Mariano Rajoy, but was refused. The central government did not want to lose another donor autonomy.

PNV leader Iñigo Urkullu said in an interview with Catalan newspaper ARA that he agreed with the line of Mas. According to him, he would join Mas "on the way of recognition of self-determination of the Basque Country and Catalonia."

"Spain has big problems, and they will not be solved. They will fester further and further," said Urkullu. He also supported the agreement between Britain and Scotland on the referendum about the independence of the latter. His possible coalition partner - Bildu Party - is much more categorical in its requirements. The party seeks the establishment of a wider independent state: with the help of three Basque provinces of Spain, the Spanish Navarra and the French department of Pyrenees Atlantiques.

As for Galicia, this is a subsidized region of Spain. Its GDP is smaller than the average in the country (21,112 euros a year) per capita. The unemployment is close to the average numbers (18 percent), but it grows faster. The ruling People's Party (PP) won the elections in the region. Its deputies will take 41 seats in the 75-seat parliament. The Spanish Socialist Workers Party (PSOE) won 18 seats, the Galician nationalist bloc will be represented by seven deputies, nine deputies will represent the Leftist Galician alternative. The result will allow PP to form a government independently.

Local PP leader, Alberto Núñez Feijóo, certainly played a decisive role in the victory of the Party, Spanish newspaper El Mundo wrote. He is very easy to communicate with and always explains unpopular austerity measures. He managed to convince the voters that the government holds the bar of the budget deficit to 1.2 percent of GDP, and requests less assistance than other autonomies.

Noteworthy, Feijóo's election posters did not mention his PP membership. This is an unusual result in a crisis, but there are two explanations to that. First off, dependent economics does not give rise to separatist sentiments. Even the dissatisfied and troubled Greece votes for a union with the EU when it comes to elections.

Secondly, the results in Galicia are not indicative for PP. This is a bastion of the party. A native of this region - one of the brightest and most influential Spanish politicians of the twentieth century, Manuel Fraga, - became the founder of the party. Rajoy is also a native of Galicia. Rajoy will face a serious test on November 25th - during the parliamentary elections in Catalonia, which many analysts already see as a referendum about the separation from Spain.