The protest in Barcelona under the slogan "Catalonia is a new state in Europe", as well as the statement of Artur Mas' Government of Catalonia, shocked the West. He called for the region's political independence for the first time. Europe is beginning to gather fruits of its policy on Kosovo - the recognized self-proclaimed state may have followers.

For the first time we are talking about a member of the EU - Spain. September 11 marked the Dyad of Catalonia (Diada Nacional de Catalunya) - the day when in 1714 it lost its independence. The event resulted in a protest of half million people who took to the streets with separatist slogans. Withdrawal of Catalonia from Spain means automatic exit from the EU, but the Catalans sincerely believe that they will be able to begin the process of re-joining, and they must be taken back. However, they do not consider that Spain, as well as Italy, France, Portugal, Belgium and other countries has a right of veto and fears that Padania, Corsica, Madeira, and Flanders will also exercise their right to self-determination. 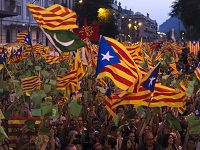 Spanish Prime Minister Mariano Rajoy likened the rally to unrest. On Thursday, September 20, Rajoy will meet with Mas, and Mas will insist on the economic sovereignty of Catalonia, that is, on a separate Ministry of Finance. If he does not obtain consent, mobilized masses will once again take to the streets. For them, the integration into the European Union without the mediation of Spain, which is perceived as a burden, is much more attractive.

Indeed, Catalonia pays 15 billion annually to the central government - much more than it is given back. That is why the Catalans as outraged to ask for financial assistance from Madrid to pay the debts that are eight points above the national average - 22 percent of GDP. Catalonia wants fiscal autonomy, the right to collect taxes and pay into the total budget depending on the income level. Spanish analysts unanimously say that Mas will return from Madrid empty-handed and will hold, as promised, early parliamentary elections that will become a referendum for self-determination. Thus, the constitutional crisis is inevitable.

Mas' Party "Convergence and Union" (CiU) won the last parliamentary elections in 2010 and today, together with the separatist parties "Initiative for Catalonia" (IC) and the Republican Party of Catalonia (ERC) has an absolute majority in the parliament. Artur Mas, previously considered "moderate" nationalist, did not become a separatist out of the blue. "When poverty knocks on the door, love flies out the window," a Spanish proverb goes. "Northern Spain is tired of southern Spain the same way Northern Europe is tired of Southern Europe," said Mas. Rajoy described these words as "gibberish." But what was once regarded as a utopia became a reality. Not by chance even the Football Association has threatened to exclude the Spanish "Barcelona" from the Spanish premier league if Catalonia leaves the country. What are the real chances of Catalonia for self-determination?

The Spanish Constitution does not provide for free withdrawal from the country, since Article 2 states the indissoluble unity of the Spanish nation. A change is unlikely: it needs to secure two-thirds majority in the parliament, and then approve the decision by a national referendum. In addition, in 2010, the Spanish Constitutional Court ruled that there was no legal basis to consider the separate nation of Catalonia, and Catalan language should not get an advantage over Spanish.

Thus, the legal path of self-determination is ruled out, but there is still political one. Recognition of sovereignty is possible by a mutual consent of the central and autonomous authorities. There is precedent. Czech Republic and Slovakia at the time opted for "amicable divorce." Montenegro seceded from Serbia in 2006 based on the results of a referendum in Montenegro and its recognition by Belgrade. But in Spain the referendum for autonomy is not required for consideration by Madrid. The convening of a referendum on constitutional issues is the prerogative of the center.

However, self-determination is part of the International Covenant on Civil and Political Rights of the United Nations from 1966. According to the document, the regional parliament unilaterally has the right to declare independence, to approve the new Constitution and the ratification of the new law in a referendum to obtain international recognition. This was the pact the West used when pushing the self-determination of Kosovo in 2008. Although Madrid has not recognized Kosovo's independence, it will be forced to accept the will of the Catalans. And there is more to it - the most radical politicians, such as those from the ERC, argue that in the future we can talk about Pan-Catalan state that would include the Catalan-speaking areas in Aragon, Valencia, Murcia, the Balearic Islands, Andorra and Sardinia (Italy). That is, in fact, we are talking about the revision of the interstate European borders.

19:21
Ukraine names the cost of country's restoration and demands to take money from Russia
19:04
Russian MP suggests renaming Kaliningrad the way new reality dictates
18:39
Ukrainian commander: 'It's a matter of time when Russian flag will be raised in Kyiv'
17:46
Russian ice hockey player accused of dodging army service as he wants to sign up NHL
17:03
Protests in Uzbekistan: Authorities backpedal as 18 people killed
16:38
Zelensky's adviser says the surrender of Lysichansk is Ukraine's successful operation
15:59
Mysl Polska: Ukrainian refugees see Poland as a cash cow
15:52
Kyiv responds to the neutralization of 40 Nazis with a staged video
15:22
The West gets caught in the trap of "Catch-22"
15:12
Russian Defence Minister announces Ukraine's total losses in ​​Lysychansk and Severodonetsk
Hotspots and Incidents
Graphic video: Another shark attack takes place off Egypt's Hurghada