What kind of war can USA and China start?

The situation around the Paracel Islands and Spratly archipelago has been heating up lately. American-Chinese relations aggravate, and China does not intend to hide its power. Can these contradictions evolve into a war? Is a military conflict possible between the two nuclear powers? 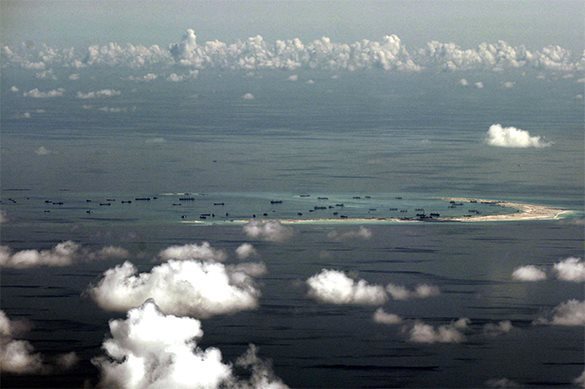 From the point of view of Beijing, the disputed islands in the South China Sea are natural islands that belong to China. China has been enlarging them exclusively for peaceful purposes. Therefore, the  regime of Chinese territorial waters and the exclusive 200-mile economic zone is a matter of time.

What is China doing in South China Sea?

From the point of view of other contenders for these territories and their patrons in the United States, China is building artificial islands on the site of flooded reefs and shoals. Therefore, according to international law, they have only a 500 meter safety zone. One could turn a blind eye on the construction of artificial islands. Yet, the Chinese are building military facilities and an airport on the islands. The airport will be capable of servicing military aircraft - this poses a threat to security in the region.

Formally, the dispute over the island involves six countries (China, the Philippines, Vietnam, Taiwan, Malaysia, Brunei). In November 2002, the countries signed an agreement to push back the decision on their status till 2052. China, as a regional and economically powerful country, follows a simple principle: you have it when you're there.

At a summit in California in 2013, Xi Jinping told President Barack Obama that the Pacific was big enough to accommodate both China and the United States. Jinping meant that there was no place for US Navy off the coast of China.

Yet, Obama did not listen. Washington has built up bases on Okinawa, Japan, (25,800 US troops and navy), South Korea (28,000 US troops), Australia and the Philippines. Even Hanoi agreed to accept US ships for maintenance.

Was this power not enough to stop Beijing in case of its aggressive actions against US allies? It was more than enough indeed. Therefore, the most recent conflict with the departure of the USS Lassen destroyer to the 12-mile zone off the island of Subi looked like a provocation.

For USA, China is a rogue state

The move to send the US warship to the disputed area had been planned to see how China would react. For the Obama administration, China is a rogue state that was too presumptuous in aspiring to strategic, political and economic influence. If Beijing tries to protest, it would create problems for its position in Asia, Europe, North and South Americas. The USA wants China in the shadow.

However, Washington may not realize the real power of China in the region. India, Malaysia, Vietnam and Thailand support Beijing when it comes to inadmissibility for foreign warships to enter the 200-mile exclusive economic zone in the region.

China showed a very hard reaction to the visit of the US destroyer. Last week, Admiral Wu Shengli, the chief of the Chinese Navy, warned US Navy Admiral John Richardson that the United States should refrain from further provocative actions that could trigger a war.

"Today, China is actually clamped from all sides, as all straits around China are controlled by the United States, - political analyst Leonid Krutakov told Pravda.Ru. - In case of a conflict, it will be easy to block all types of supplies to China. Therefore, when China makes such bold statements, the country understands its vital interests. China understands the signal that the destroyer has sent."

The expert noted that World War One started as a result of sharp confrontation between Britain, the US, Germany and Russia. "In this situation, there is always a drop tipping the scale to war," Leonid Krutakov said.

"Sooner or later, China will have to declare its new ideology," the expert noted. If China stays in the wake of the US-led policy, it will never be able to define its place in the world - the country will not be able to win over allies and clearly define opponents," Leonid Krutakov said.

One is left to wonder, whether the USA and China will unleash a hybrid war that may well take place on the territory of Taiwan.