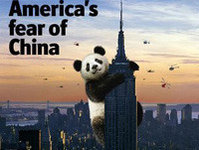 This week, China has demonstrated its growing power to the world twice. First off, China accused the USA of the appalling state of affairs in the field of human rights. Secondly, the country strongly refused form the suggestion of BRICS countries (Brazil, Russia, India, China and South Africa) to move the US dollar aside and make the Chinese yuan a convertible currency.

In the beginning of April, the US State Department cracked down on the issue of human rights in China. The latter responded in two days. The response was different from what Washington usually heard from China. Beijing would normally set out its protests against Washington's interference into China's internal affairs. However, on April 11, Chinese newspapers published a report by the State Council of the People's Republic of China - Human Rights Record of the United States in 2010. The report said that "the United States turned a blind eye to its own terrible human rights situation and seldom mentioned it." "The United States reports the world's highest incidence of violent crimes, and its people's lives, properties and personal security are not duly protected," the document also said.

US special services violate the rights of American citizens for privacy, the Chinese report said. The Americans are being spied on all the time, their personal mail gets constantly monitored, their emails and letters get copied, etc.

At least 20 percent of Americans fall victims to such crimes in the country every year, the report from the State Council of China said. The USA is the richest country in the world, but the protection of economic, social and cultural rights of Americans has been changing from bad to worse, the report says.

To crown it all, Chinese leaders said the following: "The USA regards itself as "the beacon of democracy." However, its democracy is largely based on money."

Needless to say that Beijing paid attention to Washington's countless violations of human rights outside the United States, especially in Iraq and Afghanistan, where US-led actions resulted in numerous casualties among civilians.

From the point of view of the United States, the Chinese report is nothing but blatant impudence. America believes that it has the privilege of judging other countries of the world on their human rights issues and democratic standards. Being the "beacon of world democracy", Washington grins to any criticism of its own democracy.

Nowadays, the West can only remember the wonderful times of opium wars, when "civilized" countries could do whatever they wanted in China. The Celestial Empire is publicly challenging the United States today. The above-mentioned statements challenge the US predominance in the world and clearly demonstrate disagreement with American dictate.

Afterwards, on April 13, China demonstrated its influence within the framework of the BRICS organization. The members of the organization, including the new one - South Africa - put forward a suggestion to China, the world's second largest economy, to make the yuan a freely convertible currency to relieve the world from the dictatorship of the US dollar.

China was trying to get rid of the dollar before. However, the country declined the suggestion from other BRICS members.

"China indeed supports the introduction of a new monetary unit in international settlements. However, it can be possible in remote future only," Sergei Luzyanin, deputy director of the Institute of the Middle East told Pravda.Ru.

"Of course, the Chinese do not like America, but the reality makes them accept the state of affairs that exists today. It's not a profitable initiative for China to replace the dollar with the yuan as a monetary unit. The giant Chinese economy depends on America directly. This dependence is expected to decrease in the future, which will also reduce the need in dollar settlements.

"For the time being, the world is still living under the threat of another wave of the financial crisis. It goes without saying that Beijing is not willing to jeopardize its economy even more," the expert said.

It is worthy of note that China does not accept any recommendations about its national currency from other countries. The USA has been trying to put pressure on China to make the country strengthen the yuan. However, the weaker yuan removes many obstacles for Chinese goods on the American market. This raises serious concerns with Washington, which becomes more dependent on China from the point of view of economy.