South Ossetian President Leonid Tibilov has recently announced an intention to conduct a referendum in the country to join the Russian Federation. According to Tibilov, reunification with Russia has been a longstanding dream of the South Osetian people. Moscow has not been showing friendly attitude to such statements on post-Soviet space lately, but in this case, Russia made an exception. 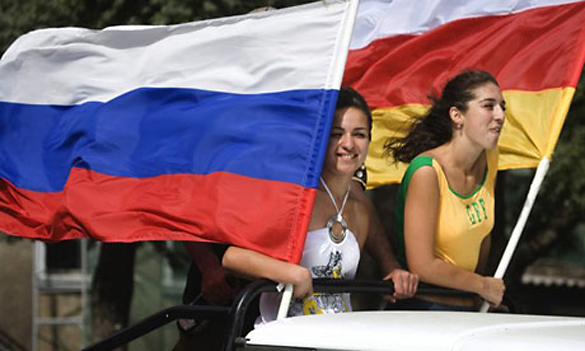 "Political reality prompts us to make our historical choice. We must reunite with brotherly Russia to ensure security and prosperity for our republic and our people for centuries to come," Tibilov said.

Moscow does not welcome statements about reunification after the referendum in Crimea. Russia halted such referendums in the breakaway republics of Donetsk and Luhansk. Transdniestria was recommended not to bother on the subject as well, even though the republic approved an adequate bid in 2006.

Leonid Tibilov made the statement after the meeting with presidential aid Vladislav Surkov. This is nothing but a concerted move to make.

All reasons to unite with Russia

The local elite has been struggling against Georgian chauvinism for 18 years and has not declined the idea of reuniting with Russia after nine years of independence. Noteworthy, South Ossetia voluntarily joined Russia in 1774. After the Collapse of the USSR, the people of the small republic in the Caucasus voted to reunite with Russia at a referendum in 1992. South Ossetia had not been part of the Georgian territory by the time of Georgia's independence in 1992.

It appears that South Osstia's reunification with Russia would be a timely move to make now. In addition to Russia's operation in Syria, it would continue the political line of Russia to build a multipolar world. Russia must take a swift action at this point, because NATO troops have already been deployed in Georgia.

South Ossetia is rich with polymerase and hydro resources, as well as charcoal, oil and natural gas. To crown it all, South Ossetia's move to join Russia would also inspire unrecognized republics in Ukraine and Transdniestria. It would be predictable for President Putin to make such a sudden, but thought out decision. It is worth noting that South Ossetia is the only country that recognized the People's Republics of Donetsk and Luhansk.

As for the West, Western leaders would reproach Russia and declare their protests, if South Ossetia became a Russian territory. Will the West impose more sanctions on the country that struggles against international terrorism? Many people in the West welcome Russia's military operations in Syria.

"South Ossetia is a part of the Ossetian statehood. There's also North Ossetia that is already a member of the Russian Federation. North Ossetia will not pull out from Russia, so it would be logical for South Ossetia to join Russia," Rostislav Ishchenko, the President of the Center for Systemic Analysis and Forecast told Pravda.Ru. "There are two aspects that speak for South Ossetia as a Russian territory - uniting people and raising the standard of their living," the expert added.

Most likely, the expert added, Russia's relations with Georgia will aggravate, as Georgia will see the move as annexation of its territory. The United States will use it for anti-Russian propaganda as well. Yet, the move to make South Ossetia a part of Russia would also prove Russia's determination to go forward despite Western opposition to it, the expert also said.