One year after Russia’s recognition of the Independence of the Republics of South Ossetia and Abkhazia, the Caucasus begins to gain a new shape, enjoy more stability and make more sense, while Moscow is welcomed as a friend in its historic sphere of operations. Given the actions and reactions of other powers not so friendly to Moscow, it hardly comes as a surprise. 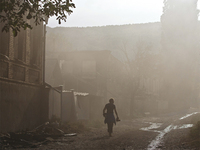 One year on, there is finally a climate of peace in the Caucasus. True, there continue to be a handful of agents provocateurs in Chechnya and there continue to be cells of criminals and bandits in Dagestan and Ingushetia, like everywhere else. However, the citizens of Abkhazia and South Ossetia today are more relaxed, feel safer, feel happier, feel at home with their new neighbours who wish to help them develop instead of exterminating them like Saakashvili’s Georgians.

The tremendous effort in social and economic projects funded and financed by Moscow from the budget of the Russian Federation comes as a stark contrast to the years of oppression these Republics suffered under a Georgia which historically refused to hold the referendums it was bound to in these territories under the Soviet law it had signed. Nothing is mentioned of this in the russophobic western press.

For years, Moscow did its utmost to try to achieve a political and negotiated solution to the question of these territories populated by Ossetians and Abkhazes, ethnic Russians, inside Georgia, always from a point of view which would be satisfactory for Tblisi. Georgia spent years, and increasingly so under the Putchist mass murdering maniac Saakashvili, blocking the processes, obstructing the rule of law and finally, last Summer, launching a shocking act of butchery – one hopes, without the consent of Saakashvili’s masters in Washington.

So what was Moscow supposed to do? Sit back and watch its citizens being slaughtered by a bunch of maniacs egged on by mercenaries from NATO sympathisers and US military advisors? Women and children were strafed with machinegun-fire in basement apartments. Old men were slaughtered in the streets. Babies were crushed with tanks by Georgian soldiers laughing in a drunken hysteria of derision and hatred. Is this the type of operations Washington trained them for?

Certainly US-sponsored Saakashvili made a dramatic miscalculation that night but what to expect from a tie-chewing lunatic wholly and totally unprepared for government and wholly and totally prepared to feather his nest and those of the mafia which surrounds him at the expense of the people of Georgia?

Nobody knows what was going through the mind of Mikheil Saakashvili on that fateful night of August 7 to August 8, 2008. Hours after signing a peace agreement, he ordered his troops to launch a massive attack against Tskhinval and to prepare a similar assault on Abkhazia, thinking (absurdly) perhaps that because Prime Minister Putin was at the Olympic Games, Russia’s attention would be focused elsewhere.

What followed was a humiliating defeat for the murderous Georgian military forces and their US backers and trainers (TV footage which western news sources had forgotten to edit showed very clear orders in American English to the fleeing Georgian troops) and despite the fact that Russia’s Armed Forces had a resounding success and a brilliant victory, the response was measured and contained, limited to a punitive raid to downgrade Georgia’s capacity to launch such a savage attack again.

Many questioned why Russia did not go all the way to Tblisi and drag Saakashvili before a court to be tried for war crimes, while meting out to the cities of Georgia what the Georgians did to Tskhinval. However, Moscow stands for the rule of law and this it upheld through a rightful expulsion of the aggressor, protecting civilian life and refraining from causing unnecessary damage (compare for example the US campaign in Iraq where civilian structures were wantonly targeted with military hardware or the criminal NATO campaign in Serbia where civilians were massacred).

Today and the future

One year on, South Ossetia and Abkhazia are undergoing a process of development and not repression. Their citizens live in peace and not in fear. The climate is one of happiness and not of bitterness, like before. There is love in the air instead of hatred. For those who doubt this, go to the Internet and ask Abkhazes and Ossetians their opinion. For those who wish to overturn the events of last August, while it is now too late, ask the people of Abkhazia and South Ossetia how they feel and who they would rather live with.

Nicaragua and the Russian Federation have already recognised the Republics of South Ossetia and Abkhazia and a further group of states is preparing to do so. Whether or not more wish to do so is immaterial. Under international law, they already exist.

Parallels with Kosovo are pointless

Parallels with Kosovo are pointless since the case is totally different. Kosovo was, is and always has been an integral part of Serbia right since the beginning of the Serb nation and the union of the Serbian peoples. It is not their fault that Albanians went there to give birth for generations and to create a population imbalance in their favour, it is not their fault that the Albanians launched terrorist attacks against the Serb authorities and it is not their fault that NATO decided to create a mafia state of drug traffickers, arms smugglers and pimps. Kosovo is Serbia and there is nothing in international law which states that a foreign power can simply carve off part of a country, give it to foreigners and say “This is yours”. The times of drawing lines on maps ended long ago and there is something called international law which must be respected by all, or then by nobody.

Georgia was obliged to hold referendums in South Ossetia and Abkhazia regarding independence. It is clear that it did not hold them because it knew what the outcome would be. And given the attempted act of genocide last Summer, given that the overwhelming majority of South Ossetians and Abkhazes would choose to live in their own states supported by Russia, their friend, it makes great sense that Abkhazia and South Ossetia should be recognised as independent states, while an independent Kosovo is not only nonsense but a violation of international law.