Ukrainian president's envoy for the Crimean Tatars people, Mustafa Dzhemilev, announced the creation of a "Muslim battalion." One should not minimize the threat of unleashing ethnic and religious wars in the former Soviet Union: Turkey is standing behind Dzhemilev's actions. 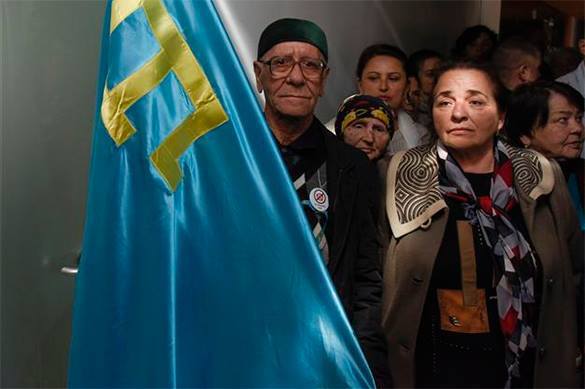 The so-called "World Congress of the Crimean Tatars" took place in Turkey's Ankara on August 1-2. The organizers of the event were former leaders of the Majlis, Mustafa Dzhemilev and Refat Chubarov. Today, they are personas non grata in Russia for "inciting ethnic hatred." The "Congress" brought together about 200 groups of Crimean Tatars from different countries, Radio Svoboda says. The participants of the event said they were forced to hold their meeting outside the Crimea because of the pressure from Russian special services. All was happening against the background of support from Turkey that said that it would never support the "annexation of the Crimea.'"

"Unfortunately, throughout history, the right of the Crimean Tatar people to live in dignity in their own homeland was undermined with collective deportations and repression. Today we are witnessing the illegal annexation of the Crimea and other regrettable events," Turkish President Recep Erdogan said in his written address to the participants of the congress.

During the congress, Dzhemilev called for "international intervention" against the "Russian occupation" of the Crimea and even demanded Turkey should "strictly enforce sanctions against Russia."

Turkey will always support the Crimean Tatars, Erdogan said - this is a part of his plan to build a new Ottoman Empire. The gas pipeline from Russia to Europe - is just a part of the plan. Supporting President Putin has nothing to do with it. Erdogan is playing his own game, in which Russia is not a priority at all.

During the congress, Dzhemilev spoke of "forced conscription of young men in the Russian army with a prospect of sending them to war against Ukrainian brothers." As an alternative, he proposed creating a battalion of Muslim fighters under the auspices of the Ministry of Defense of Ukraine.

The "Muslim battalion" will be created on the base of the voluntary battalion of Crimean Tatars called "Crimea". In addition to subversive activities, the battalion will be "controlling the passage of people and goods between the occupied Crimea and Ukrainian mainland," said Dzhemilev.

Dzhemilev and Chubarov are experienced militants, and one should not underestimate their activity. They have attempted to organize a bloodbath in the Crimea before. In February 26, 2014, they attacked activists of the "Russian unity" bloc. On 3 May of the same year, they arranged a shootout on the Russian-Ukrainian border. The Congress does not rely on the opinion of the Crimean Tatars, but this is not required for a provocation - one needs a combat unit and a mess, and this is what Dzhemilev is trying to do with the help of a "Muslim battalion."

If this happens, the Kherson region will have to deal with Islamization. "In the Kherson region, we consider it appropriate to concentrate all our compatriots who are now forced to leave their homeland and move to other regions of Ukraine. First, living together in our linguistic and religious environment, they will have be less risk of losing their national identity. Second, it will provide an opportunity to open national schools and religious institutions there," said Dzhemilev.

"This congress is a personal project of Dzhemilev. The goal is to take control of the Crimean Tatar diaspora to take advantage of its influence and capabilities," chairman of the Federation of communities of Crimean Tatars in Turkey," Unver Sel told RIA Novosti.

"This is a forum for those who did not accept the new legal reality of the Crimea being an integral part of the Russian Federation, Vasvi Abduraimov, chairman of the Crimean republican public organization "Milli Firka" (People's Party) told Pravda.Ru. - Dzhmilev's remarks are pure provocation to tarnish the Crimean Tatar people, that has always been against violence and armed struggle.