The success of the Swiss far-right who managed to obtain enough votes at a referendum to ban the construction of minarets in their country has sparked uproar across Europe. 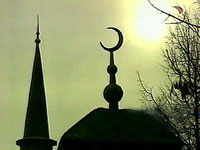 Even in Germany, where the relations between the locals and guests of the country are generally smooth, not all politicians condemned the Swiss initiative. Wolfgang Bosbach, a member of the conservative governing party, said that “the vote expressed a fear of Islamization that also exists in Germany." One has to take this concern seriously.

The result of the Swiss referendum divided politicians in many countries. While the Foreign Minister of France Bernard Kouchner condemned the results of the referendum saying they were “intolerant,” President Sarkozy begs to differ.

He believes that the ban on the construction of minarets in Switzerland does not interfere with freedom of religion and is a demonstration of the Europeans’ desire to free themselves of the external interferences with their life style. "Christians, Jews, Muslims, all believers regardless of their faith, must refrain from ostentation and provocation and ... practice their religion in humble discretion. Instead of condemning the Swiss out of hand, we should try to understand what they meant to express and what so many people in Europe feel, including people in France," he concluded.

Many other far right European politicians are ready to follow the “Swiss path,” and Austrians are not an exception. Soon after the release of the results of the Swiss referendum, the General Secretary of the Alliance for the Future of Austria Martin Strutz announced his intention to legally ban the construction of minarets in his country.

Many Italian politicians supported the results of the Swiss referendum. The minister Roberto Calderoli openly stated: “Switzerland had sent a clear signal: "Yes to church towers, no to minarets".

Italy 's interior minister Roberto Maroni made a confession saying “Someone has proposed carrying out a referendum here: I have no objections.”

"The Swiss people didn't vote against religious freedom, they voted against a symbol charged with political meaning". "I consider the referendum, a key expression of popular sovereignty, and although it could be done by passing a law, I think this is less important. It is important to recognize what people want," Maroni added that he had ''no objections to the idea of letting the Italian people decide on such an important issue''. "I'm confident a similar referendum in Italy would be approved by an even wider margin than in Switzerland," he said.

There is one “but.” The Italian legislation does not allow referendums. Yet, no one can guarantee that the legislation will not be changed tomorrow.

Maroni represents the Northern League in Berlusconi’s government that was on many occasions blamed for propagating xenophobia.

According to Nando Pagnoncelli, director of one of the largest Italian Institutes for Public Opinion, IPSOS, in the event such a referendum was to be held in Italy, the results would have been similar to those in Switzerland.

Pagnoncelli explains it saying that "in general the issue of Islam and immigration is causing concern and in some cases social alarm, because there is a perception of fanaticism. If there were a referendum like the Swiss, the voices are largely in favor of the ban.”

Dutch and Danish right-wingers also announced their intentions to follow the Swiss example.

Danish nationalists are not happy that the Mayor’s office of Copenhagen gave the green light for the construction of a mosque in the other large city of the country, Roskilde.

And in Denmark, Danish People's Party head Pia Kjaersgaard welcomed the Swiss ban and said her party would also seek a similar vote. Geert Wilders, head of the Dutch Freedom Party, called the results of the referendum “super news.” Both politicians have already taken steps to hold a similar referendum in their countries.

However, the governments of the Netherlands and Denmark rejected these initiatives saying that, according to the Constitution, these countries exercise “freedom of religion and traditional tolerance.”

Yet, the right wing does not despair and claims that they will attain the right to hold a referendum through court, since it is a normal procedure for any democratic state.

The Swiss initiative may aggravate the relations between the two cultures. It already caused an outrage in the Islamic world. According to Libyan leader Moammar Kadafi, "Switzerland has done the so-called Al Qaeda, or the terrorists, the biggest favor.”

Meanwhile, the European Court of Human Rights received six claims against the ban to build minarets in Switzerland. One of the claimants is a representative of a mosque in Geneva. He mentions that the ban is not compliant with the provisions of the European Convention on Human Rights.

The court warned that the hearing could take several months. Other similar claims are of generic nature and the issue of their consideration remains open.