Revolution of dignity comes to USA from Ukraine 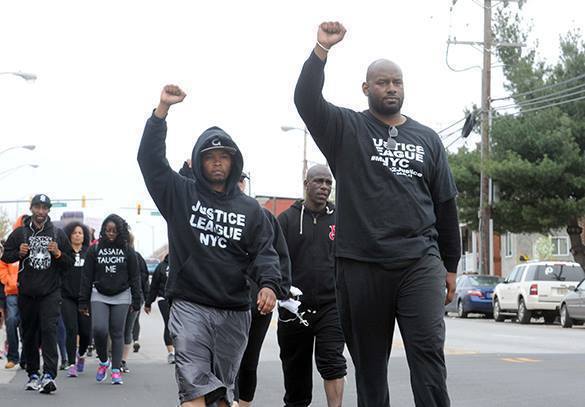 A war for justice is in store for the black America. Riots in Baltimore showed that US President Obama is unable to cope with racial problems. Contrary to mass media reports, it is not criminal gangs but organized black communities that fight in the United States. The Ukrainian boomerang has bounced back to the walls of the White House as a "revolution of dignity."

A state of emergency was declared in Baltimore on Monday, a few hours after the funeral of 25-year-old Freddie Gray, who died in police custody as a result of spinal injuries incompatible with life. Western journalists refer to Baltimore protesters as thugs, looters, and even members of local gangs, accusing them of vandalism and violence.

Maryland Senator Barbara Mikulski called the situation "horrible." According to her, any form of violence is unacceptable, and it is about time everyone should settle down and go home.

The rhetoric of American authorities can change depending on situation. When members of Berkut riot police unit were being killed in Ukraine, US officials were saying that it was "peaceful demonstrators" who were killing them. In Baltimore, 15 police officers were injured by "thugs," "rioters" and "bandits." The American establishment is unable to handle even its own double standards, and the whole world can see it.

Every 6th US black male falls out of life

About 1.5 million blacks are imprisoned in the United States today. For every 100  free black women, there are 17 jailed men, The New York Times said. The highest rate is in Ferguson - 40 men to 100 women. As for whites, the figure is only 1 to 100. The newspaper thus concludes that every sixth US black male from 24 to 54 years of age has "fallen out of life" of the American society due to premature death or imprisonment.

In a nutshell, a black individual is six times more likely to be incarcerated than a white US citizen. So-called "criminal areas" in a city are always black or Latino ghettos. This is not because black people are more aggressive by nature or "this is the way they live."  This is because millions of African Americans are marginalized as a result of unemployment, racial discrimination and poor prospects in life because of "bad" police register entries. This trend has not changed over the past fifty years, as evidenced by population census.

The United States is the most economically developed country in the world that has the largest gap between the rich and the poor. Three percent of richest families own  twice as many assets as 90 percent of poorest families. This gap has been steadily growing since the end of the twentieth century. With regard to property inequality along racial lines, the trend has been the same since the Great Depression, according to the State of Working America.

In Baltimore, for example, there are 16,000 abandoned or vacant homes. The unemployment rate in Baltimore reaches 25 percent. By the end of the twentieth century, the average income of a white family was six times higher than that of a black family. Today, the gap has grown twice, inequality.org said.

According to Black Lives Matter (organization to defend the rights of African Americans), US authorities wage police and economic warfare against the black community. According to the organization, police authorities have declared war on black people in the form of unmotivated murders, mass arrests and economic exploitation by both the state and corporations.

It is obvious that such organizations will become pioneers of social protests in the United States in the near future. The protests have already started not only in Ferguson and Baltimore, but also in New York, San Francisco, Cleveland, Chicago. A new generation is entering the war, and that generation will face hard times, because the whites do not want to share their power.

"This is a matter of orders that we have here - orders to use tough measures to show who's the master in the  country, - Vladimir Vasilyev, chief researcher at the Institute of the USA and Canada told Pravda.Ru. - US authorities use tough measures because blacks have allegedly come out of control completely. Racial tensions have remained in the US since the 1960s, and they still exist today," the expert said.

According to the expert, "the Democratic Party is interested in shaking the situation in the lower buildup of America. They want to create a model of mobilization on the eve of elections. The purpose of this work is to get voters - African Americans (9 out of 10 vote for Democrats) - to go to the polls and vote accordingly.