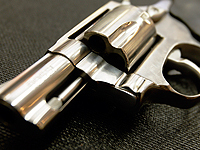 Question:  Why would cops in America shoot, strangle, or beat to death an unarmed person?

Answer:  Because they can.

It is a sad reality in today's America that cops can not only do these things with immunity and impunity, they can actually do them in front of thousands, sometimes millions, of witnesses, and still get away with it.

Don't take my word for it.  Look at the horrific beating death of Kelly Thomas, a homeless man in Fullerton, California.  Videotaped evidence showed six (yes six) cops beating an unarmed Thomas as he begged for his life.  According to the Website Police State USA, some of these officers are laughing after the incident, and one even boasts about hitting Thomas "probably twenty times in the face with [his] Taser."

Yet, in an all too predictable pattern, a jury of idiots acquitted the cops charged in Thomas's death.

Although protests erupted after this egregious verdict, both Thomas's death and its aftermath failed to receive the extensive media coverage that has been devoted to the killing of Michael Brown in Ferguson, Missouri.  Some have argued that this is because Thomas was white, so his case lacked the racial elements America's corporate-controlled media love to exploit for ratings and profits.

But even though the media may be guilty of selectively promoting stories of police brutality based upon their racial components, it should also be remembered that these same media are equally complicit in making African-Americans the "face of crime," thus fueling an environment of suspicion and fear that often causes African-Americans to be treated more harshly by police, prosecutors, and judges, and for crimes committed against them to be taken less seriously.

If there is one positive that can be salvaged from the events in Ferguson, it is that alleged cases of excessive force and police brutality that did not influence national news like the Brown killing are now being revisited.  According to the Los Angeles Times, South Bend Tribune, and Huffington Post, other victims include James Boyd, a homeless man who was shot by police in Albuquerque, New Mexico; Amadou Diallo, an innocent man who was shot nineteen times in New York City after being mistaken for a fugitive; Samantha Ramsey, shot to death by a sheriff's deputy in Boone County, Kentucky; Christopher Moreland, who was, according to a federal judge, beaten "mercilessly" by two cops in St. Joseph County, Indiana; and Jonathan Ferrell, shot ten times by a Charlotte, North Carolina police officer while looking for help after a traffic accident.

Sadly, the names on this list could go on, but the message is clear:  In all these cases, except for Ferrell's, either the killings were ruled to be justified, prosecutors and/or grand juries refused to indict, or the cops were acquitted of any wrongdoing.  And in Ferrell's case, it actually required a second grand jury to secure an indictment because the first apparently thought "voluntary manslaughter" was too severe a charge for a white police officer who gunned down an unarmed African-American.

Which raises two more questions:  How and why?

The "How" is simple.  Investigations of excessive force follow predictable patterns.  First, there is the "investigation" (aka cover-up).  In this phase, cops seize cellphones and other videos from witnesses as "evidence," to ensure the media and public don't have access to them.  Then police reports, stories, and testimony are fabricated to ensure an officer's actions comport with existing laws regarding use of force.  Next, all officers are coached to get their stories straight, and to conceal any evidence that contradicts the "official" version.

Then comes the prosecutor's role.  In America, most county prosecutors are elected officials.  As such, they usually campaign on the basis of their "conviction rates," and/or being "tough on crime."  The office of prosecutor often segues into opportunities to obtain higher political offices or judgeships.  But achieving these ambitions requires a symbiotic relationship with the police; therefore, prosecutors will do nothing to injure that relationship, and anything to maintain it.

So if victims of police brutality and/or excessive force survive their ordeals, they are likely to be charged with a plethora of imaginary crimes.  The prosecutor then tells the victim that the charges will be dropped if he/she agrees to not take further action against the police.  If the victim refuses this "deal," the prosecutor will work zealously to obtain a bogus guilty verdict, to not only "justify" what the cops did, but also to weaken any potential civil lawsuit the victim might file.  If a police brutality and/or excessive force victim dies, all the better, because only the cops are around to tell their well-rehearsed version of events.

If prosecutors are concerned about the political fallout from refusing to indict cops accused of using excessive force, they will frequently conceal their biases behind a so-called "grand jury."  Evidence and testimony presented to a grand jury is largely in the control of a prosecutor and thus can be extremely one-sided, leading many in the legal profession to joke that a prosecutor could obtain a grand jury indictment against a grapefruit with little difficulty.

This is why many in Ferguson, and throughout America, are looking askance at the grand jury verdict in the Michael Brown case, and how prosecutorial bias favoring the police might have affected how testimony and/or evidence was presented.

What a grand jury really does is give prosecutors a facade to hide behind.  They can face the public with a, "Gee whiz, it's not my fault an indictment wasn't issued.  It was the grand jury's decision."

On those extremely rare occasions when cops are actually put on trial for using excessive force, it is almost a certainty that defense attorneys will be blessed with a panel of jurors who view every cop as Andy of Mayberry, and therefore will readily swallow canned arguments about how police officers have dangerous jobs and risk their lives to protect the public; how these officers were simply "following their training"; and how the person they injured or killed was being "non-compliant," "combative," and/or "appeared to be reaching for a weapon."

The answer to the "Why" question is a little more complex.

I have argued in several previous Pravda.Ru articles that America's so-called "legal system" is not designed to obtain truth, nor is it concerned with even the most rudimentary principles of right and wrong.  In fact, the "system" will work harder to perpetuate and rationalize injustice than it will to obtain justice, and will almost always ignore, and in some cases even reward, criminality that serves it.

But juries are only exposed to the system on a case by case basis.  So why do so many of them routinely excuse actions by cops (and wannabe cops like George Zimmerman) that would cause them revulsion and outrage if committed by civilians?

As I suggested above, one problem is the media-created perception that causes white, middle class Americans to fear crime more than they fear interactions with the police, and to associate criminality with racial minorities.  Racial minorities, however, while sharing this fear of crime, must also struggle with the burden of being automatically perceived as criminals by the police, because of their skin color, dress, hair style, music, and/or location where they happen to be walking or driving.

Another problem is the fear of acknowledging police brutality.  Several of the alleged excessive force victims I've discussed in this article were white, so it is evident that nobody is exempt from being victimized by police brutality.

But that is a discomforting scenario to live with.  People do not want to believe that a late-night trip to the grocery store, or a stroll through a parking lot (Kelly Thomas), driving home from a party (Samantha Ramsey), or seeking assistance after a traffic accident (Jonathan Ferrell) can result in an encounter with police that ends in their death.  So the natural instinct is to blame the victims of police brutality, to find something, anything, no matter how minute, that can be used to rationalize a cop's actions.

Lastly, and perhaps most tragically, is the belief that some people are disposable.  Predominantly white, middle class juries, whether they consciously admit it or not, may not consider the life of a racial minority, or a homeless person, to have the same value as theirs.

The final question that many are reluctant to discuss is "Who really wants to be a cop?"  After all, some of the canned arguments used by defense attorneys have undeniable veracity:  Cops do have dangerous jobs, and they routinely witness the worst in human behavior.

There are (with some exceptions) usually two types of people who want to be police officers:  Bullies who desire the power over others being a police officer brings; and idealists who enter the profession with the noblest of intentions, but eventually find themselves succumbing to a bitterness and disillusionment that compels them to either cover-up for the bullies or become one.  This means that incidents of police brutality and/or excessive force frequently evolve from egotistical anger against individuals whose only "crime" is disrespecting a cop's authority.

The reason so many cops go unpunished is because those who control America's so-called "criminal justice" system fear that punishing cops for their criminality will not only result in the loss of officers currently employed, but also discourage others from wanting to become cops.

In other words, ignoring, excusing, or covering up incidents of police brutality and/or excessive force are considered by those in power to be acceptable alternatives to having a shortage of police officers.

The irony is that all the cops, prosecutors, and jurors willing to ignore, excuse, or cover-up police brutality and/or excessive force are not doing society any favors.  They are causing all cops, not just the bullies, to be viewed as corrupt, brutal, and racist; they are fueling a cynicism that reduces the public trust and cooperation so essential to solving crimes; and they are further dividing America along racial and economic lines.