The daily reports reaching us from Syria show that the War against the various terrorist formations operating on the territory of this ancient nation is far from over. Not a day goes by that acts are not committed of an atrocity has nothing to do with the rules of engagement, already ruthless in themselves. 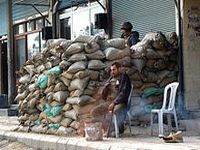 Brutal killings, disappearances, even the destruction of ancient monuments considered by the rest of the world as treasures of Humanity.  In the West, few politicians have the courage to speak out about what is happening at the hands of terrorist phalanges. Among these few, there is the Honorable Senator Richard Black, of the Commonwealth of Virginia State. His activism in defense of the Syrian Nation has not earned him any official medal. In contrast, the ISIS declared him as an enemy. But maybe that is the best reward that he might have. It seemed therefore natural to ask Senator Black to share with us his views once again.

Q) Thank you very much Senator to be here with us once again.... I read the news: ISIS declared you as enemy. Have you attracted the attention and someone was offended?

A) ISIS saw my interview reported by RT News. I said that if Damascus falls, there will be a dangerous power vacuum in the Mideast.  The dread black and white flag of ISIS will fly over Damascus.  Within months after the fall of Damascus, Jordan will fall and Lebanon will fall.  That will accelerate the ongoing radicalization of Turkey and result in an eventual drive of terrorist armies against Europe.  Already, thousands of Libyan refugees - many of them religiously hostile toward Christianity - are flooding into Italy.  Europe is increasingly at risk. ISIS used my words to prove to their readers their actual intentions.  ISIS was essentially saying, "This proves what we have told you, and even our enemy, Senator Black, agrees that this is our objective." NATO and the Arab countries attacking Syria are blind to the extreme danger of unleashing a terrorist poison they cannot contain.  NATO and the Arab world must understand how dangerous it is to arm terrorists to invade Syria.  Those terrorists will return home to destabilize their native countries.  If we continue helping and arming them, they will establish a large, powerful caliphate that will threaten both Europe and the Arabian Peninsula.  Western military support for rebels is suicidal madness.  We must reverse course before a wave of violence sweeps across Europe.  European nations are most at risk.  They rely on the U.S. to set their Mideast foreign policy.  And that policy is reckless and deadly.

Q) Are you under protection by police or some security agency?

A) My well-being is not the main concern.  As a Marine officer, God shielded me in many fierce battles.  Yet every man's time must come, and by the grace of my Savior, Christ Jesus, I am ready. My real anguish is for the Christians, Alawites, and Yazidis and for those Muslims who actually want to live in peace.  NATO was hijacked into a venomous war of aggression on the side of Sunni terrorists.  They practice the most barbaric form of Islam on earth -Wahhabism.  Its roots are in Saudi Arabia.  Wahhabis preach violent hatred; its followers destroy every archeological wonder and artwork that lies in their path. Wahhabism is promoted by America's allies:  Saudi Arabia, Qatar, Kuwait and - increasingly - by Turkey.  The U.S., UK, and France led NATO into arming and training terrorists at camps in Jordan, Qatar, Turkey and Saudi Arabia.  We call those terrorists "moderates" to mask their extremism.  But most end up fighting for ISIS and al Nusra - the Syrian branch of al Qaeda,

Q) I beg your pardon for this question but I ask you to be clear with us... do you think to change your mind about the situation in Syria?

A) Those who attack Syria are loathsome.  The Syrian army has never beheaded anyone; has never amputated limbs; has never cannibalized its enemies; has never stoned women to death; has never crucified Christians; has never burned men alive in cages; and does not conduct slave markets where little girls are sold to perverts who rape them.  Jihadists armed and trained by NATO and our Arab allies do all these things.  How can anyone expect me to support such beasts against Syria? I stand against monsters who are murdering every Christian in the Mideast, just as they beheaded the 21 Egyptian Christian workmen.  ISIS murdered those brave men just because they professed an undying belief in Jesus Christ, the Son of God. I am appalled by my own government's refusal to condemn ethnic cleansing of Christians.  The administration refuses to acknowledge that Christians are being singled out for their belief in Christ.  Yet even a child knows that this is true. Every journalist should read the Syrian Constitution.  In three places, it declares religious freedom.  It explicitly declares that women are entitled to the same rights as men.  And the President of Syria is limited to two seven-year terms in office.  Now compare that with any other Arab country.  Saudi Arabia is an absolute dictatorship, where women are treated as property and whose husbands are encouraged to beat them.  Why are we on the side of barbarians and against Syria?

Q) Where ISIS wins, people died in a cruel way or disappear. Even children, Senator. Even children.  How to believe the abuser of the population that wants to free?

A) Syrian rebels do not want freedom.  They want to enslave the nation of Syria.  ISIS, al Nusra and their allies are imposing harsh Sharia Law everywhere.  If they capture Syria, there will be a bloodbath.  The slave markets they have established will become permanent fixtures of Mideast culture. I am amazed that Western leaders are funding Wahhabi organizations, knowing that they are reestablishing ancient slave markets.  Western leaders are totally silent about the evil of Christian slavery.  Liberal politicians who rail endlessly about historical slavery ignore modern-day slave markets.  They don't care if Christians are being sold at market.  This reflects our grave moral collapse.  Western values are being perverted by our intervention in Syria.  I am disgusted by our collective lack of moral decency.

Q) We know ISIS is not a joke. Thousands of Syrians could witness this truth with their blood and their life. According to your opinion, what solution for the Syrian situation?

R) The first step is for the U.S. to stop arming and training terrorists to invade Syria - a neutral, nonbelligerent nation.  All nations attacking Syria are doing so in clear violation of the Law of War. The war in Syria would have been nothing but a minor uprising had other nations not thrown gasoline on the fire.  It is in everyone's interest to end the war in Syria and restore peace to the Mideast.  Our policy of "regime change" has been a disaster of historic proportions.  Nothing good has come from it.  Whether, Kosovo, Iraq, Libya or Syria, people die when international elites play games of war with neutral countries.  I'm not a pacifist.  I've bled on the battlefield.  But fomenting violence against neutral countries is shameful, and it must stop. The so-called "moderate rebels" whom we are training often slip quickly into the ranks of ISIS and al Nusra - the Syrian branch of al Qaeda.  They have become one of the most powerful and threatening armies on earth.  We must recognize the danger that our actions pose toward all stable countries.  The U.S. actually pays the salaries of the mercenaries we call "moderates." We must cut American funding for all mercenaries in Syria. Western nations conducting the air war against ISIS should request permission from Syria whenever they overfly its sovereign territory. They should start coordinating air actions with Syrian forces--who are the most powerful enemies of ISIS.  If ISIS were attacked with a coordinated air-ground campaign, they could be rolled back much more quickly.  But this can only be done by cooperating with Syria.  We should provide intelligence and material support to Syrian forces. The U.S. must stop transferring advanced arms to ISIS, al Qaeda and al Nusra through third parties like Saudi Arabia.  This is happening today and it is a criminal violation, just as though we sent the weapons directly to the terrorists.

Of course, we hope the best for Senator Black, his family and collaborators.