Shocking new reports have appeared about the active involvement of operationals from NATO countries in the Syrian conflict, training and aiding terrorist combat units and directing murderous strikes against Government forces. The reports, if true, mean that the NATO leaders are liars when they claim aid to the Syrian terrorists is non-belligerent. 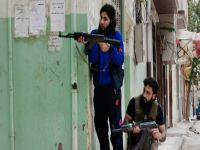 The report is written by Italian journalist Achille Lollo, correcpondent of the publication Brasil de Fato, and editor of the TV programme Informative Quadrant "Quadrante Informativo". His research, involving the study of reports in several international publications, points towards the direct involvement of NATO operationals in combat operations, siding with the terrorists in confrontation with the Syrian authorities.

The reports are in the British publication The Sunday Times, the German Bild am Sonntag and the French radio programme Bfmtv-Rmc, which revealed that the British, German and French governments have authorised the deployment of special forces to the combat zones to support the FSA terrorist forces, aided by Qatar which is paying 10,000 USD a month for the dessertion of a regular soldier and up to 100,000 USD for senior officers.

The Sunday Times report claims that special operations forces are actively enganed in monitoring and providing advice in terrorist strikes against Government forces. Not only this, it goes further: British special forces directed and participated in a murderous ambush against the Syrian regular army; British, French and German weapons stored in the NATO base in Benghazi, Libya, are being ferried to Adana, Turkey, a NATO base used as a command centre for the FSA terrorist forces.

This is William Hague's "non-combat aid"? Where is the public outcry in the UK? Where is the investigation in Parliament? Where are the political heads of Cameron and Hague for involving the United Kingdom in an illegal act of international terrorism, breach of the UN Charter by taking sides in an internal conflict outside the auspices of the UNSC?

This being the case, Cameron's Britain has become a terrorist state, an outlaw and a pariah in the international community. This is what Britain stands for today. After the most disgusting attack on the sovereign Libyan Arab Jamahiriya, in which NATO weaponry was turned against the water supply and electricity grid, now we have active engagement inside Syria.

The response from the authorities? "We do not comment on special forces operations". One can almost hear the smugness in the self-satisfied chortle in Whitehall.