Syria: The case against Assad

The apparent desperation of those who support the Syrian "opposition", insinuating that the Syrian Government used chemical weaponry without a shred of evidence, using photographs to prove the case, taken in Iraq in 2003, using dodgy proof from the King of Spin, the BBC, spells out a sorry story similar to those of Libya and Iraq. 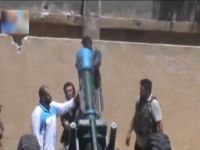 Do you remember Colin Powell's "magnificent" foreign intelligence work providing a smoking gun to justify an attack against Iraq? Photographs of milk factories, complete with a dodgy dossier copied and pasted from the Net from a decade earlier. And this time around, a telling déjà vu from none other than John Kerry, underlining his speech calling for action against Syria with a BBC photo showing a kid leaping over hundreds of bodies lined up in rows wearing shrouds. In fact it was taken in Iraq, in 2003. A decade earlier. Wrong country, wrong decade...but what the heck, eh? Is Congress going to vote for this? Perhaps the members should listen to the people they represent.

Moral of the story: do not use British information as "proof" and do not trust a word US Secretaries of State have to say.

Remember the source of the latest "case" against President Assad's supposed use of chemical weaponry in Ghouta on August 21? The source was Doctors without Frontiers, an instrument financed by corporate elitists, who claimed there were 355 people killed. The corporate media concentrated on the children, they purposefully ignored the Syrian soldiers lying in bed caught in the same attack. So where is the figure of nearly one thousand five hundred dead peddled by Kerry?

Remember the declarations by the United Nations' Carla del Ponte, a member of the UN Independent International Commission of Inquiry on Syria, that there are "strong, concrete suspicions" that the Syrian opposition forces had used chemical weaponry? Why does John Kerry not bomb them, then?

Remember the declarations made by the United States of America that the Syrian government was "stalling" and not allowing the UN inspection team to carry out its work? While Secretary Kerry was making these declarations, the US government was informing the Syrians that the team did not have the conditions to enter the area under investigation. Then Kerry himself said the investigation came too late to be credible. To note: as soon as it received a request for the inspection team to visit the site, the Syrian government implemented an immediate ceasefire and granted unimpeded access. This, in the words of the US State Department, amounts to "destruction of evidence".

Moral of the story: do not believe a word John Kerry says; imagine a barefaced liar in charge of a country's diplomacy. Why, in 2011, Kerry was calling Bashar al-Assad "a very generous man" no doubt remembering the dinner he and his wife shared with the Assads two years previously, smiling politely at each other around the table.

Has the Obama administration informed its citizens of its funding and arming of the Syrian opposition, which includes terrorists with links to al-Qaeda? Has it explained its plans for military action? Does anyone really believe that it will amount to a few cruise missiles or more obviously, will it not be a campaign to topple the Syrian Government and turn the country into a haven for al-Qaeda?

Are the American Catholics aware of the official position of the Vatican, blasting the western powers, claiming there was no evidence against President Assad in the Ghouta attack and taking a firm stand against military intervention?

Now for the evidence. The first video in this piece shows clearly the Syrian "rebels" firstly attacking a bus then planning to attack a village using Sarin gas (Please turn on your speakers).

Secondly, Syrian TV showed a photograph of wrapping found in former rebel-held areas, labeled by a Saudi chemical agent factory. Thirdly, rebel arsenals captured by Government troops revealed more chemical agents made in Saudi Arabia and gas masks supplied by the same. Fourthly, a phone call that was intercepted by the authorities reveals a conversation between a terrorist and his handler, a Saudi, incriminating the terrorists in a chemical weapons attack.

So, how does that incriminate President Assad?

The United States of America, as we have seen before, claims it has evidence against the Syrian Government, in which case why does it wait so long to reveal what it has, unless it has been buying time to cook the results? Remember Saddam Hussein's WMD?

Sixthly, intercepted communications between two FSA operatives earlier in the year revealed plans by the Syrian opposition to carry out a chemical weapons attack in an area around one square mile.

Seventh, any act of war must necessarily and always be subjected to a separate resolution from the UN Security Council. This is a basic and underlying principle of international law consecrated in the UN Charter, signed by the USA. If Washington does not wish to follow the documents it signed then it should leave the UNO - US out of UN, UN out of US.

Point 8, the threats, armed intervention and interference by France, the UK and the US (the FUKUS Axis) in the internal affairs of a sovereign state are in contravention of international law. Point 9, the FUKUS Axis has responsibility for the acts of butchery, murder, rape and torture perpetrated by the western-backed terrorists in Syria, including the slitting of throats of 120 Kurdish children, the decapitation of others, the massacre of entire villages; the chaining of toddlers to fences to witness the murder of their parents, as their mothers were disemboweled and their bodies raped by these demons financed and equipped, directly or indirectly, by Obama and his friends.

"How is it possible that any country would use chemical weapons, or any weapons of mass destruction, in an area where its own forces are located?" President Bashar al-Assad.

In conclusion, there is no case against President Assad, who has a 70% approval rating among the Syrian population. Source: NATO. There is a huge and growing case against Presidents Obama and Hollande and Prime Minister Cameron. As they sit smugly calling President Assad a barbarian, do they remember the acts of those they support, such as slicing breasts off women, gang rape, slitting of throats, decapitations, the sex trade in Syrian women and children by Jihadi Islamist fanatics, harvesting human organs, taken from the bodies of refugees while they are still alive, mostly carried out in Turkey and the starvation of hundreds of thousands of civilians in Aleppo by their terrorist forces?

Is this what Congress is going to vote for?

Photo: Western-backed terrorists fixing a blue gas canister to artillery to fire against civilians, similar to the one fired from Douma, controlled by the Syrian opposition, against East Ghouta on August 21. The United States of America refuses to consider this as evidence.