Minsk and Munich: History repeats itself 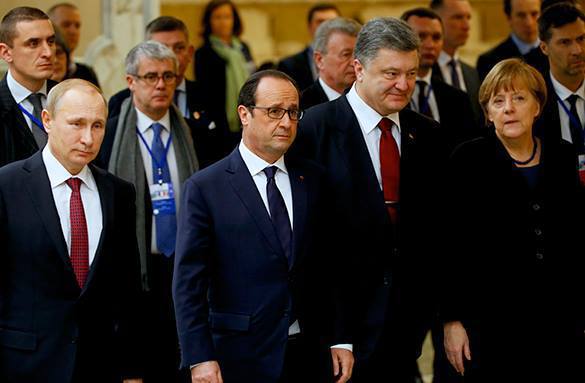 At the 1938 Munich Conference, the leaders of Germany, Britain, France and Italy met in order to find a solution for an urgent security problem. The German minority of Czechoslovakia (a nation so artificial it could not survive the Fall of the Berlin Wall) was being molested and persecuted by the Czech majority. The leaders meeting in Munich decided that those regions of Czechoslovakia inhabited by Germans were to be separated from the country and attached to the German Reich.

Many historians, obviously enjoying all the benefits of hindsight, regard the Munich Agreement as a fateful step in the lead-up to World War II. However, at the time of the Agreement it was widely regarded as a major breakthrough towards peace. In the words of British leader Neville Chamberlain, it had secured "peace in our time". An overwhelming majority of the British people acclaimed Chamberlain on his way from the airfield to his official residence in London. Indeed, it would seem as if peace had at last been won, thus small wonder that so many were elated. In his country, German leader Adolf Hitler was likewise hailed as the bringer of "peace in our time."

Behind the scenes, however, some new that peace was definitely not secured. For instance, US leader Franklin Delano Roosevelt ("FDR"), who wanted war to break out in Europe. His entire foreign policy was focused on this one goal: war in Europe, but he was devious enough to cloak his true intentions in sweet words of peace. Very much like the current US leader Obama, who speaks with two tongues.

FDR finally got what he wanted in 1939, when Britain and France, with secret US backing and firm promises of support, declared war on Germany when it invaded Poland after the Polish government had refused a peaceful settlement of its quarrel with Germany. Thus what had first still been a local war quickly transformed into a world war. FDR truly deserves admiration for the cunning way he brought about this war, without directly and openly compromising either himself or the US.

It seems obvious to everyone that whatever the outcome of the conference, peace will remain a distant ideal, almost impossible to attain. No sooner had the news of the outcome of the Minsk conference become known, the Obama regime, showing its true colors, began publicly expressing doubts as to the agreement's viability and chances of success, hinting that it would continue arming the fascist-dominated Kiev puppet regime. With the Obama regime intent on getting itself another "Fresh, Happy War" it seems the world is now careening towards a tragic Armageddon.

Indeed, each of the past five centuries in (Europe) the Western World, has begun with one or more major wars:

-      the 16th century began with a series of wars fought in and over the control of Italy between the Hapsburg and Bourbon dynasties, involving Europe's major powers, France, the Holy Roman Empire, Spain, Venice, the Papal States and England. These wars raged until mid-century.

Since there are already wars being fought in the Middle East, in the Ukraine, in Afghanistan, since the Bush regime has declared war on the ROW (Rest of the World), with the ostensible purpose of fighting terrorism ("War on Terror"), is there any reason why these would not or could not morph into a major war involving other superpowers? After all, this pattern has prevailed since the fifteen hundreds.

Just like it once sacrificed Poland on the altar of its lurid ambition, the US is perfectly willing to sacrifice the Ukraine for the same motive.