Poor Greece and the Unholy Trinity 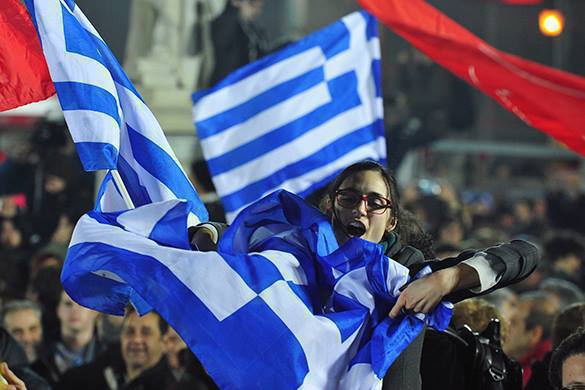 Just look at them! Look at the bosses of the "Troika," have a good look at their faces, study their expressions. What do you see? What do you see when you look at the face of Jean-Claude Juncker, the recently enthroned president of the "European Commission?" That's right! You see nothing, just a vapid grin. Small wonder for here you have a man addicted to alcohol and without both spine and character. Look at the face of Mario Draghi, boss of the European Central Bank. Doesn't he look like Dracula, with his cold, emotionless eyes and that sadistic grin pasted on his face? And what about the IMF boss, that charming Frenchwoman, Christine Lagarde? Eternally tanned, she has that unmistakable air of the girl from the provinces that has made a career. Of course, she is married to that career, to who or what else? Lagarde's face exudes a chilling ruthlessness so rare in women. Here you have a woman made out of titanium, covered with teflon and with no heart. And finally, their errand boy, Jeroen Dijsselbloem, a glib opportunist willing to stoop no matter how low just so as to advance his career.

Please forgive me for being personal about these people. Yet, what choice do we have? The EC, ECB and IMF (and their errand boy) currently governing Greece are only comparable to the Four Riders of the Apocalypse, sowing death, disease, famine and raining down any other sort of plague on the Greek people. They cloak their destructive deeds in high sounding words meant to confuse us. They talk of commitment, responsibility, accountability, growth, reorganization, flexibility, liberalization, transparency, sacrifice. They pretend having the best interest of the Greek people at heart. Alas, hearts they do not have. Besides, given the secrecy with which Juncker, Draghi and Lagarde (like most of their colleagues) surround themselves, especially when they meet for the various Bilderberg, G-7, G-20, Davos and other meetings, their pictures are about all we have to get a clue as to what they are up to. The last thing we ought to do is take what they say at face value.

And of course, we need to look at their actions. These are destructive in the extreme. Brandishing a set of economic tenets, claimed to have been "scientifically proven" to be correct, the Troika lot and their helpers wreak havoc wherever they set foot. Everything is to be privatized: transportation, infrastructure, utilities, housing, education, welfare, health care, water, you name it. Everything collectively or state-owned is to be sold off at bargain prices. Wages are to be slashed, unions busted, critics silenced and marginalized (or even liquidated). Everything and everybody is to be turned into a commodity. This system is called "neoliberal capitalism" but it is in fact no more than glorified fascism.

The IMF and its bosses are, by definition, all crooks. From the 1960s to the 1980s, working through vicious and brutal dictatorships and aided by the US, the IMF has left behind a trail of destruction, death and social misery in Latin America. It was for the IMF (and primarily to benefit US business) that the military staged a coup in Brazil in 1964, it was for the IMF and the US that Pinochet was installed in Chile in 1973, and Videla in Argentina in 1976. As soon as they were in power, the military suspended or abolished civil rights, imposed censorship, and began to persecute, torture and kill opponents, especially leftists. At the same time, neoliberal economic principles were introduced and privatization initiated or accelerated. Back in those days, most Europeans were indignant at what the people of Latin America were forced to undergo. Little could they know that before long they themselves would be subjected to the very same economic practices.

With the exception of the Greeks. On April 1967, the Greek armed forces (upon the instigation of the US) grabbed power and established a military dictatorship, similar in scope and character to the brutal Latin American dictatorships. (Greek director Costa Gavras made a gripping movie about this: Z, which is still very much worth seeing). Most people outside Greece hardly realize that the US-sponsored military dictatorship in Greece came closely on the heels of a disastrous civil war that only ended in the 1950s, and that in itself was in a way a continuation and a result of the bloody German occupation that began in 1941. Occupation and civil war claimed hundreds of thousands of lives and wrecked the infrastructure and the economy, not to speak of the social fabric.

Needless to say that when Greece joined the European Community in 1981, hopes were high, as many Greeks were convinced their tribulations had finally ended. At least they were convinced they could never more be subjected to the kind of treatment meted out to them by the military junta. For Europe, Greece's entry was presented as a historically significant step, because with the cradle of democracy as a member, Europe could justifiedly lay claim to being the most important bastion of freedom in the world. And what a tragic farce it has all turned out to be!

In 2002, Greece joined the Euro based upon a manipulated financial analysis provided by Goldman Sachs, where the current ECB president, Draghi,was then appointed as a director. Six years later Greece was the first victim as the financial crisis that began with the collapse of Lehman Brothers reached European shores. As a result of it, Greece was forced by the EU to adopt the very same policies that were once introduced by the Papadopoulos regime of 1967. With the difference that in this day and age such austerity measures no longer require a military dictatorship to be imposed first. Today, these measures are forced down the throats of a numbed electorate by "democratically elected" politicians, such as Alexis Tsipras and Yanis Varoufakis.

It is about time the Greek people drag them out of office and put them on trial for high treason. Like the collaborationist regimes of World War II, these boys should be made to answer for their deeds. Subsequently, all Europeans should address the members of the Unholy Trinity and bring them to justice.