Greek Prime Minister Georgios Papandreou is in Moscow for a two-day visit. While Greece is on the verge of default, the  Moscow talks were devoted to be the issues of economic collaboration. The officials may also discuss the possible abandonment of visa regime between Russia and the EU, the issue mentioned by the Greek Prime Minister prior to his visit. 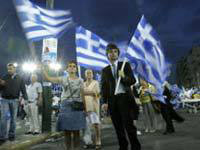 The Prime Minister stated that lightening of the visa regime is achieved through the instructions given to the heads of Greek diplomatic and consulate services in Russia. He mentioned that the services are instructed to help Russian citizens willing to travel to Greece.

He said that consulates in Moscow and Saint Petersburg have moved to new buildings, and four Russian cities (Moscow, Saint Petersburg, Yekaterinburg and Novosibirsk) now had Greek visa centers created to serve Russians more efficiently. The Prime Minister added that the Greeks issued visas in 48 hours, faster than any other country.

Papandreou also said that Greece played an important role in signing the agreement between EU and Russia (enforced on June 1, 2007) that simplified visa issuance to certain categories of citizens, and preserved the price of visa at 35 Euros instead of 60 Euros. The Prime Minister emphasized that Greece supported Russia’s request to abolish visas for Russians entering EU.

Greece is nearly the only country in EU that supports Russia on visa issue. Greek issues minimum visa rejections for Russian citizens, and the country is visited by 250,000 to 300,000 Russian tourists annually. The government of the right winger Costas Karamanlis who resigned in the fall of 2009 also supported this position. It is nice to see that Georgios Papandreou is consistent with this policy.

The policy is based on high-level bilateral relations. There were no major problems between Greece and Russia in the past years. Greece has never criticized Russia for the events in South Ossetia. Greece has never recognized independence of Kosovo. The Greek government supported the idea of the new agreement of European safety and spoke against locating elements of the US missile defense system in Europe.

Economic collaboration between the two countries is also of a high level. For example, one of the branches of the South Stream is to go through Greece, and the construction of the pipeline for the project is nearly completed. Now the countries have to obtain the agreement of neighboring Bulgaria critical for bringing the pipe to Greece from Novorossiysk.

Additionally, Papandreou is to discuss another project with Russia, the Bourgas-Alexandropoulis pipeline which will carry the fuel from the Black to the Aegean Sea. The Greek Prime Minister said prior to his visit that he expected the construction to begin within six months. Again, the only issue here is Bulgaria that stalls the project.

At the moment the issue of Russia’s economic collaboration with Greece is particularly sensitive. Greece is on the verge of default. Although Papandreou said on February 15 that he does not intend to ask for financial aid, it is not ruled out he would have to do it. The country’s national debt is 300 billion Euros (112 % of GDP), and the budget deficit is nearly 13 percent.

Greek media says that by spring the country will require 54 billion Euros. The lion share of this amount was to be given to Greece by the EU that is not pleased with a possibility of a default in one of its countries. However, there is information that Papandreou is going to ask Russia for 10 billion Euros loan.

Media also reports that during his Moscow visit, the Greek PM will try to obtain additional funds for the construction of the Bourgas-Alexandropoulis pipeline. Formally, he would be asking for funds for the ecological needs in order to calm down concerned people. In reality, these funds would be the investment Greece needs so much today.

Another possibility is to take out a loan from Russia to purchase Russian weapons. While Greece is a member of NATO, it is still willing to buy Russian missile complexes С 300, Тор - М 1 and Тор- М -2. Greece is even prepared to increase purchasing in the future. Russia does not mind having another customer; the problem is the customer that is defaulting.

This visit to Russia is Papandreou’s trump card in his relations with EU. Today Ministers of Finance of EU countries will gather in Brussels to discuss aid for Greece. If Papandreou manages to get funds from Russia, his relatively stingy European colleagues will be in awkward position. It would look like Russia found money for Greece, while its partners in united Europe failed to do so.

The above mentioned abolishment of visas has a material component to it. If visas are cancelled, many Russians will be eager to enjoy beautiful Athens, monasteries of the Afon Mountain, and Crete beaches. It is well known that Russian tourists like to throw their money that would come right to the Greek treasury.