Pravda.Ru had an interview with first deputy head of United Russia faction at the Russian Parliament, leader of the Russian Union of Afghan Veterans, Franz Klintsevich. We spoke about US plans in Ukraine, the situation in the Donbass, perspective of a new coup in Ukraine and Pentagon's plans for a nuclear attack on Russia. 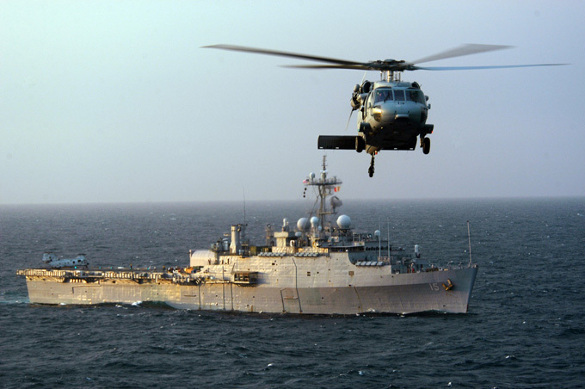 "There is a theory saying that during the Caribbean crisis, there were two minutes left before a nuclear war. Now they say that the doomsday clock was moved two minutes forward. A lot has been said recently about the danger of a global nuclear war. How dangerous is the current situation?"

"Two young bulls are resting under a tree, chewing grass. One of them says: "Is it true that people feed us for meat?" The other one, a lazy and fat one, replies: "Come on, enough with your conspiracy theories!" In fact, the current state of affairs is very complicated. Of course, our liberal part that loves the West remains very skeptical about the danger. Yet, the West is serious and it is not going to give up.

"Those people, who started the mess, can only care less about Ukraine. After all, the anti-Russian hysteria did not come out of nowhere. If it wasn't for the Crimea, they would have found something else. All the recent events and destructive processes are connected with Russia this way or another. Russia is related to  everything that is associated with the development of NATO.

"It was agreed that NATO would not expand. Now, they do not even consider it necessary to explain anything. The USA is quietly doing its job, having clearly declared Russia the prime enemy. Obama's recent speeches about national exceptionalism, superiority, mission and might, in fact, became the declaration of  new neo-Nazism. It was a declaration of superiority of the nation and the country over the rest of the world.

"There are a few countries left that can somehow demonstrate their independence. The Americans control the Arab world and Europe. When the Americans say something, they do it as well. The USA is indeed a superpower, the dollar is indeed a world currency. Naturally, the abilities of the American nation are enormous. Global processes for them are like an open book.

"However, the Americans fatally miscalculated, as far as Russia is concerned. I am talking about Russia's economic potential, its resistance to crises, its  moral and psychological situation, the spirit of the people. This can be seen even in Ukraine, because there are a lot of Russian people there in Ukraine. For any European country, the situation that we can eyewitness in Ukraine today would be worse than a nuclear attack. Yet, in the southeast of Ukraine, people live and survive. The Ukrainians, in their majority, dislike Russia, to put it mildly. Yet, the situation is changing now. Of course, people are zombified there. Many of them believe that there are Russian soldiers and tanks in the Donbass."

"Almost a year has passed. So much has been said about the presence of Russian troops in the southeast of Ukraine. Yet, there is not even one photograph of one single tank. Do people really believe that there are Russian troops in Ukraine?"

"Yes, they do, unfortunately, although they do not even realize what our modern tanks are like. One does not have to say much about the morale of the Ukrainian army. For the Russian army today, Ukraine and the Ukrainian army is not a serious enemy. Thank God, we have people here, who understand that a military conflict is inadmissible. Yet, more than 6,000 people have been killed in the country in the military conflict in Ukraine, according to official statistics from Kiev."

"We know that this figure is a lot larger."

"It is, but this is not the point, as 6,000 deaths is already a terrible number. This situation is not incidental - everything had been planned. As they say, if you want to defeat Russia, cut Ukraine from it first. They cut Ukraine away and now they are working against Russia. However, Russia has not swallowed the bait. The goal of Russia's opponents was to get Russia involved in a war. Russia does not walk that path, so they now want to make Russia stop helping people. This would cause another very big and serious problem connected with the people, who live in Russia. They do not accept it that Russia can dump its people, who are fighting against fascism.

They failed to drag Russia into the war. Russia has not dumped the people of Novorossiya either. There is no regular Russian army there, but there are volunteers. Russia provides humanitarian and financial assistance. Russia accommodates refugees from Ukraine and so on. I predict mass exodus of the population of Ukraine to the Russian Federation - about 7 million people will move to Russia in the near future. The process has already begun. People were forced to leave their homeland, their homes and go to Russia to save their lives from all that horror.

"It is not only Russia that they try to escape to, although they are not welcome in other countries either."

"Of course, but Russia is their main destination. Poland has not given one single permission, not even to one refugee. In Russia, the number of refugees from Ukraine is already about one million. About 300,000 of them have officially received refugees status. There are as many as 3 million Ukrainians living in Russia. Seven more million may come. Some of them will ask for the refugee status, others will try to stay with their relatives to stay afloat at least somehow.

"Such a large number of refugees is a very large burden for the country. They are all Russian people, who need help in their time of need. In Ukraine, though, people already express their dissatisfaction with the sitting government. Soldiers of Aidar battalion have already tried to storm the building of the Defense Ministry of Ukraine, and the latter met their requirements. However, sooner or later, people will no longer be able to deal with all these problems. Today's leaders of Ukraine do not talk to people - they listen to commands from the USA instead.

"Time will come when American masters no longer need them. The West will soon tell us - this is your brotherly nation, so deal with it, help them all.

"Europe has so many problems with the 11-million-strong Greece, so no one can feed 43 million Ukrainians today. It will be up to Russia to deal with this problem. The plan is to destabilize and weaken Russia. I am against just giving. One should try to find constructive solutions. Russia will have to face a plethora of new problems soon. This is a part of a sophisticated concept.

"The Americans have the so-called Prompt Global Strike and rapid deployment forces. Today, all these forces have taken effect. They started forming plans and moving forces. We obtain this information from special services. As part of the global strike concept of the Pentagon, the Americans plan to strike up to 4,000 missile blows on Russia within one hour. The missiles will strike various objects - military, civilian, management, communication - to disable control centers and prevent a retaliatory nuclear strike.

"However, Russia is strong enough. Russia is capable enough not to give the USA an opportunity to destroy our country. This is ridiculous, when someone says that the balance of forces has changed, that the United States of America can destroy Russia 36 times, and Russia can destroy the USA 18 times. Striking the territory of the United States of America with six modern nuclear warheads will demoralize the Americans immediately. If a problem like this occurs, there will be not six, but six hundred missiles falling on America, even if they intercept some of them.

The Americans are forced to play the game of saber-rattling, and they are doing it seriously. At the same time, they conduct undercover activities. For example, more than a thousand professionals of private companies, affiliated by intelligence services of the United States, now work on the territory of Ukraine.

I am convinced that Russia needs this cold shower. This will make us take a sober look at the situation. We do not want war with anyone, we are not going to attack anyone, we do not need anyone else's territories. It had not occurred to anyone to take the Crimea. The Russians living in the Crimea had foreseen the events and voted at the referendum. Those people have never been Ukrainians. As soon as they got such an opportunity, they voted to return home to Russia. Otherwise, the Crimea would have been a lot worse than the Donbass is today."