Caribbean crisis as a stage to strategic stability

It is impossible to speak or write about the doomsday in the past tense. The Caribbean crisis, which broke out in October 1962, could have become the doomsday. At that time the Soviet Union and the United States for the first time were ready in earnest to start a nuclear war. 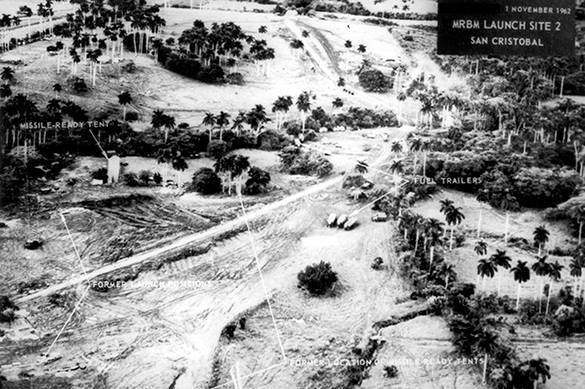 At the end of the 1950s, a really explosive situation arose in the world. It was caused by an open military and political confrontation between the USSR and the USA. After the successful tests of the R-7 intercontinental ballistic missile (IBM) at the beginning of 1957, the USSR already in October that same year put in orbit its first artificial Earth's satellite, having thus shown to the United States that its own territory became potentially vulnerable.

However, the European part of the USSR, too, could at any moment be attacked by American Jupiter medium-range nuclear missiles which were deployed in Turkey since 1958. This circumstance very much irritated the Soviet leadership which understood that despite several R-7 missiles at its disposal (incidentally, very difficult in usage and, frankly speaking, not very much reliable as IBMs), the United States had an obvious advantage both in conventional and nuclear means of waging war. To achieve an equilibrium, it was necessary in any case to have a new springboard for deploying Soviet nuclear weapons.

It seemed that the chance appeared on January 1, 1959 when the leader of the Cuban revolution, Fidel Castro, triumphantly entered Havana practically without fighting. Relying, most probably, on his intuition, which prompted that the USA would hardly be able to put an end to Cuba overnight, Nikita Khrushchev decided to conclude a secret treaty with Fidel Castro, having promised him to defend the Cuban revolution by Soviet weapons.

In this way a political basis was laid for the deployment of Soviet medium-range nuclear missiles in the territory of Cuba. The USA fully justified Khrushchev's hopes. On April 17, 1961, the USA made an attempt to land its amphibious troops on the island. The result of this operation, doomed to failure beforehand, was sad mainly due to the crying incompetence first of all of the Central Intelligence Agency. During the two days of battles practically the entire unit of one and a half thousand men was destroyed.

This humiliating defeat of the Americans inspired Nikita Khrushchev, and at the meeting with US President John Kennedy in June 1961 in Vienna he said that he was ready not only to use armed force in Cuba but also intended to make the territory of Western Berlin to be controlled by the government of the German Democratic Republic.

That was a direct challenge. Young Kennedy replied by calling up for military service 250,000 reservists. A military end of the confrontation was swiftly approaching. It is obvious that Khrushchev tried at any price to deploy Soviet strategic weapons in Cuba, believing that this would be a telling argument for Kennedy to make concessions in principle in Europe.

Since the spring of 1962 regular sea convoys were bringing to the island the necessary equipment and missile accessories. However, at the end of August the construction of the launching positions was spotted by an American U-2 reconnaissance plane, and on October 14 the US President was told that the first Soviet ballistic nuclear missile was placed on a launching pad and was ready for firing.

It is difficult to imagine what John Kennedy felt when he learned that it takes only four minutes for a Russian missile to reach Washington, for example. However, after long hesitations he nevertheless rejected the plan of immediately bombing the island, but ordered to fully blockade Cuba from the sea.

The Soviet leadership was informed in a sharp form that the United States reserved the right to stop all Soviet ships with military equipment and ammunition (there were no others incidentally) which were heading for Cuba. In case those ships will not obey the order, they will be sunk.

Understanding that military operations against the Soviet Union, which most likely will lead to a global nuclear war, can start at any moment, John Kennedy addressed the nation on October 22 and frankly said what might await America in the nearest hours. In many schools classes were stopped, people hid themselves in bomb shelters frozen with fear in the expectation of horrible explosions. This panic lasted for two long days.

But on October 24, an end came to all these fears: a Soviet convoy heading for Cuba changed its course and left the Caribbean Sea. On October 26, Nikita Khrushchev sent a special message to John Kennedy in which he demanded a promise never to attack Cuba in exchange for dismantling the Soviet missiles on the island. The next day a new demand came - to withdraw American missiles from Turkey.

On the advice of his brother, Senator Robert Kennedy, the President decided to accept and fulfil the first demand of Khrushchev, but he completely ignored the second one. The point was that by that time the American Jupiter missiles in Turkey were ready for dismantling, but John Kennedy did not want to take them off combat duty under the pressure of Khrushchev. Several months later, the Americans dismantled those missiles and quietly withdrew them from Turkey.

On October 28, Nikita Khrushchev officially agreed to withdraw the Soviet strategic weapons from the Cuban territory. The threat of war had passed. However the fear, the shock from that situation in both capitals proved to be so great that both the Soviet Union and the United States speeded up the fulfilment of the programs for the creation of strategic armaments.

Already in December 1962 American Minuteman-1 intercontinental ballistic missiles were placed on combat duty. The Soviet Union tried not to lag behind. In the end, the arms race led to a strategic parity which ensured stability in the world and lowered for a certain period of time the possibility of resuming global military crises.