Russia to have foreign army and US ballistic missiles? 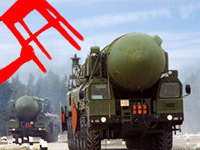 The scandal connected with the recent statement from the designer of ballistic missiles Topol-M and Yars, Yuri Solomonov, regarding the possible failure of the state defense order for 2011 is gathering pace in Russia. President Dmitry Medvedev ordered to find the alarmists, whereas Defense Minister Anatoly Serdyukov did not rule out the fact that his department will strive to dismiss the defense officials who were involved in the scandal.

Pravda.Ru has recently reported that Mr. Solomonov accused the Defense Ministry of the possible failure of the state defense order in 2011. According to him, the ministry refuses to conclude contracts to deliver strategic missiles to Russian Armed Forces. The head of the ministry said in response that the products of defense complex enterprises were overpriced.

President Medvedev said that since the production of the Russian defense complex was overpriced, the ministry could either order defense products from other companies or purchase them from other countries.

"You must purchase only high-quality hardware on transparent prices, not on the prices, which certain companies may like," Medvedev said July 12 during his meeting with Vice Prime Minister Sergei Ivanov and Defense Minister Anatoly Serdyukov.

"The Defense Ministry must look into every contract in detail and analyze its prime cost. You must realize well what it is all made of. This is big money, so you shouldn't buy rubbish," the president added.

It appears that someone is certain that foreign-made defense products can satisfy all of Russia's defense needs. Maybe Russia could hire a foreign army in this case? If the above-mentioned statements can be referred to the scandal with Yuri Solomonov, then it would mean that Topol-M and Yars missile systems are rubbish. If so, are there any replacements for them? It would be ridiculous to believe that Russia could replace its ballistic missiles with other missiles made in foreign countries.

What is the point of the scandal? Is it possible to say that domestic defense enterprises set high prices on their products? If it is true, what is the reason for it?

Ivan Rodionov, a professor of Higher School of Economics:

"I am no stranger to the work of the defense complex, so I can say for sure that the main problem is the market relations that were introduced for the state defense order system. During the Soviet times, the prices were determined by the state. The state was forming the order and assigning the funds for defense enterprises. This practice was abolished in the beginning of the 1990s. So what do we have now? The system has proved to be absolutely unreliable under market conditions. The amount of defense orders from the state has decreased considerably. As a result, the defense complex wrapped up the serial production and started manufacturing its products piece by piece. Needless to say that it is economically profitable to make, let's say, 200 aircraft, rather than five. Therefore, the growth of prices is based on small orders.

"The people started leaving the enterprises because of the lack of funds - they couldn't get their salaries for months. The state was not funding the development of defense science, no new arms were created. The quality of production was declining. Nowadays, after 20 years of such an approach, we are forced to say that our arms can be overpriced indeed.

"However, if someone in this country wants to find a replacement to domestic arms, I would like to remind the situation, in which Russia found herself during WWI. Prior to the war, Russia depended on the shipments of aviation engines from France. During the war, the French restricted the export of their engines, which created very big problems for Russia.

"One should change the system of work in the defense industry to improve the situation. We must refuse from the market system at this point. The state administration of the defense order is not efficient either, but our defense enterprises will not survive under market conditions," Mr. Rodionov told Pravda.Ru.

Leonid Ivashov, the President of the Academy of Geopolitical Problems:

"One can name a number of reasons why we are having this situation today. It amazes me why the President, the Supreme Commander-in-Chief, receives information about the state of affairs in the defense industry from a person like Dvorkovich. He is not a military man! What does he understand?! All of that affects the relations between the Defense Ministry and the defense complex of the country. What about the person who heads the Defense Ministry? (Mr. Anatoly Serdyukov, the Defense Minister, used to sell furniture - ed.).

"All of those things testify to the mess that we have in the country in practically all spheres. Just look at the statistics of man-made catastrophes. The main problem of the conflicts between the Defense Ministry and the defense complex of the country is the market relations. There is no state standard for the prices. Even the president admits that we have corruption everywhere, so it is obvious that there is corruption in the defense industry of the country - there is big money there.

"The defense industry depends on many factors, such as fluctuation of prices on raw materials, including metals. Inflation plays its role too. It's enough to compare the prices that we have now and the prices that we had last year. It seems that Defense Minister Serdyukov is unaware of that. The fluctuation of world prices on raw materials is another very important factor that regulates the cost of defense products. They use gold, platinum and other precious metals when manufacturing defense products. Everyone knows how gold prices have grown recently.

"The state must interfere in the situation. The state is supposed to minimize the risks in the industry to save it from collapse. If the system remains unchanged, the disruption of the defense order may occur on a regular basis. The sad experience, which Libya has been having recently, shows how the relations between the countries are built. Little has changed since the Middle Ages at this point. If you're weak, those who are stronger will destroy you.

"Replacing Russian arms with foreign products is a ticking bomb - look at what happened to Iraq. They simply deactivated Hussein's air defense systems, which he had bought in the West.

"A ballistic missile and a nuclear submarine is not a piece of furniture. The state defense order system must be transparent. Defense Ministry officials and entrepreneurs must not have an opportunity to line their pockets on that. Otherwise, we will continue to make the same mistakes."