The devaluation of the ruble is inevitable, and Russia has all chances to experience the financial collapse of 1998, pessimistic economists say. Several respectable Russian and Western newspapers shared this opinion Monday claiming that the drop of Russia’s two major stock indexes last week could be comparable to the level reported in 1997. However, the Russian government persistently continues to deny all rumors about the ruble devaluation. Central Bank and government officials promised over the weekend that there would be no sudden devaluation of the national currency. 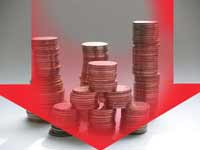 Experts were particularly concerned about the appearance of the word ‘sudden’ in the latest statements from the government, the Nezavisimaya Gazeta wrote.

Vice Prime Minister Igor Shuvalov said Sunday that the Bank of Russia had all opportunities not to allow sudden fluctuations of the ruble rate. “The reserves that we have and the development of the financial system in which we operate, do not let the world crisis destroy our financial and economic systems,” the official said. He added that one should not be concerned about sudden fluctuations of the ruble rate because there were no prerequisites for that to happen at the moment.

First deputy chairman of the Central Bank of Russia, Aleksei Ulyukayev, made a similar statement the day before. “We have a good foreign balance, large reserves and a strong economic basis. The fact that we can witness the consequences of the world financial crisis does not mean that the ruble will be devalued strongly,” the official said.

Many economists do not believe the official statements. “The devaluation of the ruble is inevitable today just like it was inevitable in 1998. Russian banks and companies have been borrowing dollars since 2003 being unable to receive ruble loans. A similar situation occurred on the threshold of the default in 1998. No wonder that one and the same politics may lead to the same result,” Mikhail Khazin, the president of Neocon Company said.

“The emphasis of the word ‘sudden’ in the statements from Shuvalov and Ulyukayev was an unpleasant surprise for many. The complete coincidence between the current events and the summer of 1998 is even more unpleasant at this point. The Central Bank was giving stabilizing loans to the banks prior to the default in 1998. The banks would convert them into foreign currency and wire them outside Russia immediately. Nowadays, the Central Bank provides liquidity to the banks, which they exchange for foreign currency too,” Mikhail Delyagin, the director of the Institute for Globalization said.

The payments of Russian banks and companies on foreign loans in the fourth quarter of the year made up about $53 billion, whereas the reduction of currency reserves exceeded $45 billion in over a month only. “The dynamics of the reserves shows that the funds assigned to support the banks are exchanged for currency, putting pressure on the ruble. Like in 1998, the Central Bank only pretends that it controls the use of state-provided financial help,” Delyagin said.

The Federal Service for Financial Markets closed the RTS and MICEX stock exchanges on October 24 till Tuesday, October 28. The cost of Russian shares on October 24 was equal to their cost in 1997. The state presence on the market does not help: the shares of state-run corporations lost up to 33 percent of their value despite the provided financial assistance.

For example, the shares of Russia’s oil giant Lukoil closed on RTS at 24.9 – this price was reported in August 1997. “The market has returned eleven years back, the crisis has eaten the entire growth,” a trader of a large investment bank said.

Professor Wolfram Schrettl of Berlin’s Free University said in an interview with Deutsche Welle that the devaluation of the Russian ruble would be possible if foreign creditors ask for their money back. Russia’s foreign debt has grown and become even larger than expected, the expert said. Sergei Stepashin, the head of Russia’s Clearing Chamber said October 16 that Russia’s total debt was evaluated at $560 billion, which was already more than the nation’s currency reserves.