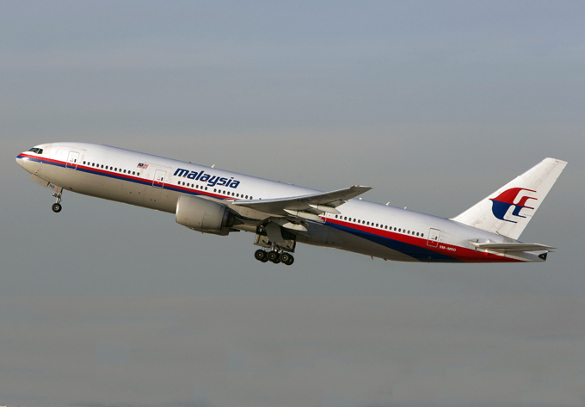 As tracked by Malaysian military radar, MH370 apparently made a sharp left turn at 0215 hr local time in flying towards Palau Langkawi at the northern end of the Malacca Strait. Within a few hours of this lost contact, there was a frenzy aerial search in the Gulf of Thailand, and then in the north end of the Malacca Strait in the following days. No floating debris of MH370 was found at either search location. Andaman Islands, Maldives, Mauritius and even Tajikistan were mentioned as possible destinations of the missing MH370. Then the news media were fed to report that MH370 had apparently made another left turn in the southern direction after the last radar-tracked position, and had probably plunged into the southeastern Indian Ocean after it had ran out of fuel. A highly publicized international effort was subsequently mobilized to search for the missing airliner. Australia stepped forward to take the lead in this multi-national search along the coast of Western Australia.

Some 12 days after the disappearance of MH370, some very grainy satellite photographs were released by the Chinese and French governments purportedly to show debris from the missing airliner. These low-resolution images were certainly amateurish. Perhaps China and France knew much more about the missing MH370 and were purposely camouflaging the true capability of their military spy satellites. Other military powers with equal or superior satellite surveillance capabilities were conspicuously silent. Nevertheless the debris shown in these low-quality images was later identified to be merely generic trash from human activities in the high sea. Two weeks after the disappearance of MH370, Inmarsat Plc with the collaboration of the British government suddenly claimed that the analysis of its satellite electronic signal data confirmed the appropriateness of the search area off the coast of Western Australia. The electronic "ping" from equipment on board MH370 and purported visual sighting of debris were brandished almost daily until early April. In the six months since the disappearance of MH370, absolutely no physical objects have been found.

What happened to the Malaysian airliner?

None of these publicly-disclosed events after the last radar tracking of MH370 off the northwestern coast of Malaysia makes any sense. There was nothing to suggest that the pilot (and/or the co-pilot) was planning to commit suicide by plunging the airliner into the sea. The final voice communication was not Allahu Akbar (Arabic: God is great) or Tawkalt ala Allah (Arabic: I rely on God). If suicide was indeed planned, there is no logic for the airliner to continue flying for several more hours only to plunge into the southern Indian Ocean off Western Australia due to the lack of fuel. In the suicide proposition, the pilot and/or the co-pilot could have merely changed the air-lift control causing the aircraft to crash instantly into the Gulf of Thailand, shortly after the airliner had left the air space under Malaysian flight control. Moreover, if an airliner had simply crashed into the sea on purpose, floating debris such as destroyed aircraft parts and personal belongings of passengers would usually manifest without exception, within hours and days after the crash, even if the sea was very deep. Compare Air France Flight 447 crashing into the Atlantic Ocean in June, 2009. The Brazilian Navy recovered the first major debris within 5 days of the accident. The area in which the Air France aircraft crashed had a depth of as much as 4,700 metres. Catastrophic equipment failure is not plausible as the aircraft had too many sharp changes in flight direction.

Curiously Diego Garcia (7.31 deg S; 72.41 deg E), an atoll of the British Indian Ocean Territory, was never mentioned in public news media as a possible destination of MH370. The only notable exception was the article written by John Chuckman in the April 18, 2014 issue of the Pravda.Ru. Chuckman mentioned Diego Garcia only obliquely in connection with American satellite surveillance capabilities. Why is there such international silence? This atoll is well within the flying range of the missing MH370, shorter than the distance from Kuala Lumpur to Beijing. The non-stop flying time from Palau Langkawi to Diego Garcia would have been about 5 hours. In 1971, indigenous Chagossians were summarily evicted by the British Government so that the 1966 lease of the atoll, perhaps in perpetuity, could be activated by the United States Government for the construction of a military base. Public record shows that the atoll has become one of largest military bases in the World today.

The clandestine military-related activities including infra-legal interrogation and detention facilities are shrouded in extreme secrecy by both the US and British governments under the guise of "national security". It is also generally known that Diego Garcia is heavily fortified with the most advanced military armament and surveillance technologies. Any prospective intruders by sea or air would have been detected instantaneously, perhaps even at a distance of many thousands of kilometres away, by omnipresent military reconnaissance ships, aircrafts and satellites. The radar signature of MH370 would have been very distinguishable; the dimensions of a Boeing 777-200ER are 64 metres long, 6 metres diameter and 61 metres wingspan. It would thus be improbable that the flight path of MH 370 could have gone undetected for many hours after its abrupt change of flight path in the Gulf of Thailand. In essence, everything that moves on Earth today is monitored actively by several competing military powers.

Captain Zaharie Ahmed Shah and First Officer Fariq Abdul Hamid may have deep belief of Islamic values and were possibly disgusted with the persistent globalized systemic persecution of Muslims by the pseudo-Christenic "West" (more correctly EUSAC: Europe-United States-Australia-Canada) during the past few decades. Perhaps the pilot and co-pilot had only intended a peaceful protest by simply landing the aircraft at the Diego Garcia military airfield to highlight the widely-suspected malfeasance occurring unabated in this British colony. It is obvious to those skilled in the art that crashing a single large civilian aircraft such as Boeing 777 into the Diego Garcia military base would not be able to cause any permanent devastating damage to anything. Thus an intentional suicidal crash would have been an ineffective exercise. With all electronic communications emanating from MH370 turned off purposely by the pilot(s) after the final voice communication with Malaysian air traffic control, the unidentified intruding aircraft might have been destroyed in mid-air by missiles fired from the atoll. It is also plausible that the radio communication of MH370 might have been switched on again to emit relevant identification during its final approach to the Diego Garcia runway. This renewed radio communication could have been ignored by the military command at Diego Garcia, on the imagined belief that this secretive air base is under attacked by "Muslim extremists", viz., civilian aircraft pilots who are Moslems. If MH370 was allowed to land at the Diego Garcia air base, the event could become a management fiasco for the resident militaries as too many secrets of the air base would have to be revealed to the 229 passengers and 12 crew members of MH380, and subsequently to investigative journalists.

If MH370 was shot down in mid-air, there would surely be debris scattered in this region of the Indian Ocean. A coordinated effort to direct publicized search of the missing airliner in an entirely different region of the Indian Ocean would certainly be the most effective approach to allow the perpetrators sufficient time to clean up and sanitize the area where the airliner was shot down with the loss of 239 innocent lives. Could British and Australian government information be trusted? Both Britain and Australia might be parties to this deceptive pursuit as both countries are members of the Five Eyes, an exclusive geo-political intelligence-sharing alliance which includes United States, Canada and New Zealand. Although Inmarsat Plc is an independent company listed on the London Stock Exchange, it is certainly not immune to be co-opted by bribes or by threats by EUSAC governments. Witness the revelation of Edward Snowden during the past year on the wilful participation of global telecommunication companies in massive interception of private communication data of ordinary citizens everywhere in the World, on behalf of the American National Security Agency (NSA) and British Government Communications Headquarters (GCHQ). There are many examples from recent geo-politics in which seemingly compelling evidence disclosed to the public was indeed manipulated or fabricated purposely to fit the desired outcome.

The truth about the disappearance of MH370 has yet to surface. One can recall months of official denial through the State-influenced EUSAC news media in the destruction of Iran Air Flight 655 in Iranian air space by an American missile in 1988. Eight years later, the United States settled this tragic incident with the Islamic Republic of Iran, without issuing an apology or admitting guilt, by paying financial compensation to the families of the 290 innocent victims travelling on the ill-fated Iran Air Flight 655.

The air and sea search for the missing aircraft can be expected to continue along the coast of Western Australia and other areas of the southern Indian Ocean as money is no object when there is a serious task of cover-up to be undertaken. There is no conspiracy theory about the disappearance of MH370. There is a conspiracy of wilful silence by some parties and artful misleads by others.

The author is a social-justice researcher based in Singapore