The Seamounts Project in the southern Indian Ocean has discovered a new species of large squid almost one metre long, among several new fish and crustaceans, according to the International Union for Conservation of Nature, which led the expedition. 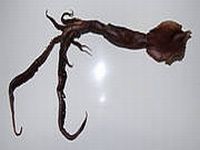 The IUCN-led Seamounts cruise in the southern Indian Ocean last year gathered 7,000 samples. Amongst more than seventy different species of squid was the new discovery, 70 centimetres in length, a member of the Chiroteuthid family, which have light-emitting organs to attract their prey. Other species discovered include a wide range of fish, crustaceans and plankton.

The Seamounts Project was launched in 2009 in the southern Indian Ocean, a six-week cruise attended by the world's leading marine experts, above seamounts (underwater mountains), aiming to explore the depths and uncover their secrets. According to IUCN, "The aim of the cruise was to unveil the mysteries of the seamounts in the southern Indian Ocean and to help improve conservation and management of marine resources in the area".

The classification work is a painstaking process. "Many specimens look similar to each other and we have to use elaborate morphological features such as muscle orientation and gut length to differentiate between them," stated Alex Rogers, Principal Scientist and Marine Biologist at the Zoological Society of London.

Carl Gustaf Lundin, Head of the IUCN Global Marine Programme, claims that "The new discoveries will not only satiate the appetite of scientists working in the field but will help improve conservation and management of Indian Ocean resources and future management of deep-sea ecosystems in the high seas globally".

"IUCN works on biodiversity, climate change, energy, human livelihoods and greening the world economy by supporting scientific research, managing field projects all over the world, and bringing governments, NGOs, the UN and companies together to develop policy, laws and best practice" claims the website*.

"IUCN is the world's oldest and largest global environmental organization, with more than 1,000 government and NGO members and almost 11,000 volunteer experts in some 160 countries. IUCN's work is supported by over 1,000 staff in 60 offices and hundreds of partners in public, NGO and private sectors around the world".

Seamounts Project Partners:
The Seamounts Project is supported by expertise and funding supplied by partner organizations including the United Nations Development Programme, the Global Environment Facility, Zoological Society of London, the EAF-Nansen project, the Institute of Marine Research, Agulhas and Somali Current Large Marine Ecosystems Project; the Marine Ecology Laboratory, University of Reunion, the African Coelacanth Ecosystem Programme, as well as the Total Foundation and Censeam.