For India, USA and Russia are good friends

Russian President Vladimir Putin is leaving for India for a business visit. But is it worth expecting any sensations from this trip, for example, a BRICS initiative or making good arms deals? Head of the Center of Indian Researches of Institute of Oriental Studies of the Russian Academy of Sciences, Tatyana Shauman gave comments on this issue in an interview to Pravda.Ru. 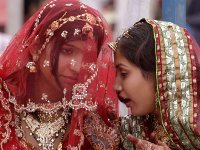 "This is the 15th summit meeting of leaders of two countries. President Putin has visited India more than one time. I think this visit will be important since it takes place in changed conditions - both global and regional ones. This visit takes place in conditions difficult for Russia. And India shows its support, advocating against any sanctions towards Russia. Back in the day, when India was in a tough position, Soviet Union and Russia rendered support to it, now is the time for India," Tatyana Shauman said.

According to the expert, there were changes in India's leadership since elections were won by the former opposition party that changed the monopoly of Indian national congress. "I think there will be a number of important events, agreements. Agreements on further development of military cooperation will be signed. Non-military agreements will also be signed, and they will focus not only on trade, but joint developments as well. That will correspond to a new slogan suggested by the new Prime Minister of India - "Made in India". I believe they will also discuss problems of a transport corridor and India's problems interested in cooperation with the Customs Union," Tatyana pointed out.

The Pravda.Ru correspondent asked the expert what person, in her opinion, is Prime Minister Narendra Modi, how she could characterize him. This question was put not through idle curiosity, indeed his party controls the parliament, so he can get through his own decisions, those benefitting the Russian-Indian cooperation.

India communicates whoever it wants with

"In elections in April-May 2014 his party obtained such a majority that gives an opportunity to run the country without making coalitions, and Narendra Modi is a person who is rather well-known. There were certain problems. He was Gujarat Chief Minister, he is 63 years old now, he is very active and it is considered that Gujarat has been actively developing economy-wise under his leadership. However there are and were some complaints against him due to the fact that he represents the Hindu Nationalist Party. There were always concerns regarding relations with Pakistan and other Islamic countries. Especially since in 2002 in Gujarat there was a very serious unrest on religious grounds, and about a thousand Muslims died. Many accused Modi that he did not take sufficient measures to prevent these killings. In 2004 USA even cancelled his visa," Tatyana said.

As for relations with USA, according to Shauman, they were always of high priority for India: "Let's not forget about the fact that there is a large Indian diaspora in the United States - over 2 million Indians who live there and take part in all areas of the American life. Indian top specialists work in the Silicon Valley, in US scientific and R&D centers. So we must not be under any illusion. This is an independent foreign policy direction. But that does not mean that in relations with Russia India will play alongside USA. India is a great country, it communicates with whoever it wants to".

The Pravda.Ru correspondent asked the expert if she believed that Russia should stake on Pakistan (taking into account the coming problems in Afghanistan) instead of India?

"I'm strongly convinced that Russia will not stake on Pakistan. Russia and India are interested in stabilizing the situation in Afghanistan. But without Pakistan it will be hard to accomplish that, perhaps even impossible. Therefore, we must develop our relations with Pakistan to have a framework to discuss arising problems. Surely, Pakistan has complicated relations with India. And last week there was another serious terrorist attack in Jammu and Kashmir. 21 people died there, and Pakistani militants are naturally accused of it. We need to look for opportunities for a dialogue. If we do not have any relations with Pakistan, we will not be able to exert any influence and negotiate mutual interests. And we need to do it absolutely without sacrificing our relations with India," Tatyana Shauman summarized.