Israel: Gas, Oil and Trouble in the Levant

Israel is set to become a major exporter of gas and some oil, if all goes to plan. The giant Leviathan natural gas field, in the eastern Mediterranean, discovered in December 2010, is widely described as "off the coast of Israel." 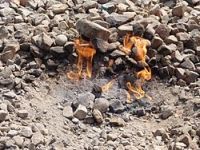 At the time the gas field was: " ... the most prominent field ever found in the sub-explored area of the Levantine Basin, which covers about 83,000 square kilometres of the eastern Mediterranean region." (i)

Coupled with Tamar field, in the same location, discovered in 2009, the prospects are for an energy bonanza for Israel, for Houston, Texas based Noble Energy and partners Delek Drilling, Avner Oil Exploration and Ratio Oil Exploration.

Also involved is Perth, Australia-based Woodside Petroleum, which has signed a memorandum of understanding for a thirty percent stake in the project, in negotiations which have been described as "up and down." There is currently speculation that Woodside might pull out of the deal: " ...since the original plans to refrigerate the gas for export were pursued when relations between Israel and Turkey were strained. That has changed, more recently, which has opened the door for gas to be piped to Turkey."

The spoils of the Leviathan field has already expanded from an estimated 16.7 trillion cubic feet (tcf ) of gas to nineteen trillion - and counting:

"We've discovered nearly 40 tcf of gas, and we have roughly 19 tcf of that gas that's available for export to both regional and extra-regional markets. We see exports reaching 2 billion cubic feet a day in capacity in the next decade. And we continue to explore.", stated Noble Vice Chairman Keith Elliot (ii) There are also estimated to be possibly six hundred million barrels of oil, according to Michael Economides of energytribune.com ("Eastern Mediterranean Energy - the next Great Game.")

Woodside Petroleum might also be hesitant to become involved in further disputes, since they are already embroiled, with the Australian government, in a protracted one in East Timor relating to the bonanaza of energy and minerals beneath the Timor Sea, which has even led to East Timor accusing Australia "of bugging East Timorese officials during the negotiations over the agreement."(iii)

Woodside's conflict in East Timor however, may well pale against what might well erupt over the Leviathan and Tamar fields. The area is not for nothing called the Levantine Basin. Whilst Israel claims them as her very own treasure trove, only a fraction of the sea's wealth lies in Israel's bailiwick as maps (iv, v) clearly show. Much is still unexplored, but currently Palestine's Gaza and the West Bank between them show the greatest discoveries, with anything found in Lebanon and Syria's territorial waters sure to involve claims from both countries.

In a pre-emptive move, on Christmas Day, Syria announced a deal with Russia to explore 2,190 kilometres (850 Sq. miles) for oil and gas off its Mediterranean coast, to be: "... financed by Russia, and should oil and gas be discovered in commercial quantities, Moscow will recover the exploration costs."

The agreement is reported to have resulted from "months of long negotiations" between the two countries. Russia, as one of the Syrian government's main backers, looks set to also become a major player in the Levant Basin's energy wealth. (vi)

Lebanon disputes Israel's map of the Israeli-Lebanese maritime border, filing their own map and claims with the UN in 2010. Israel claims Lebanon is in the process of granting oil and gas exploration licenses in what Israel claims as its "exclusive economic zone."

That the US in the guise of Vice President Joe Biden, as honest broker, acting peace negotiator in the maritime border dispute would be laughable, were it not potential for Israel to attack their neighbour again. In a visit to Israel in March 2010, Biden announced: "There is absolutely no space between the United States and Israel when it comes to Israel's security- none at all", also announcing on arrival in Israel:"It's good to be home."

Given US decades of "peace brokering" between Israel and Palestine, this is already a road of pitfalls, one sidedness and duplicity, well traveled. There is trouble ahead.

Oh, and in demonology, Leviathan is one of the seven princes of Hell.