USA not world's most democratic nation

It is customary for many companies and publications to summarize the results of the outgoing year by publishing various ratings, identifying the best of the best. Austrian Association for Democracy Ranking compiled a rating of democracy in various countries. Allegedly, the democratic U.S. was only on the 15th place in the rating. 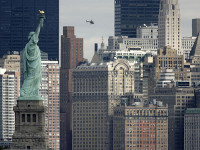 Some rating results were predictable, some came as a surprise. For example, the United States took only the 15th place, far from the top states with exemplary democracy. The country considered one of the freest in the world did not even make it to the top ten. Last year, the U.S. could not boast championship either and was ranked the 14th.

The list contains 104 countries. The leaders this year were Norway, Sweden and Finland. The top ten also includes Switzerland, the Netherlands, Denmark, New Zealand, Ireland, Germany and Austria, the home of the rating.  Asia are Japan shared 20th place, and South Korea was 33rd. In the Middle East Israel's democracy is developing (23rd place), while Kuwait was ranked 77th and Lebanon - 79th. The countries that experienced "Arab Spring" also managed to improve their indicators.

Russia was nearly at the end of the list, finishing only in the 88th place. It is followed by Haiti, Nigeria, Egypt, China, Pakistan, Togo, Guinea-Bissau, Libya, Syria and Yemen.

The rating by Democracy Ranking announced in Vienna is formed on the basis of political, economic and gender indicators as well as level of corruption. The rating also focuses on accessibility of health care and education for citizens and foreigners. The efforts in preservation of the environment are also evaluated.

The list of countries for the rating is prepared by US-based Freedom House. The method of Human Development Index, introduced by the United Nations to compare countries in terms of socio-economic development, is used to compile the list. The study involves only those countries that are deemed "free" or "partially free" by Freedom House.

The evaluation system is described in detail on the website of Democracy Ranking. A country can get a maximum of 100 points, 50 of which are given for political indicators. A country can get maximum ten points for each of the following categories: economic initiatives for laws governing gender equality and state of education, health and environment. The important role is played by civil liberties, press freedom and corruption.

Democracy Index reflects the level of democracy in the country. Expert assessments and opinion polls that consider 60 key indicators are taken into account. These indicators are grouped into five major categories: 1) Activities of the Government, 2) Electoral process and pluralism, 3) Political Culture, 4) Political participation, and 5) Civil liberties.

International ratings always indicate low level of democracy in the Russian Federation. Last year, a research agency The Economist Intelligence Unit has submitted another "Democracy Index of the world" in which Russia lost 10 positions, finishing 117th and becoming one of the countries with "authoritarian political regimes."

The study authors noted deterioration of democracy in Russia, and its political system was called the "regime of managed democracy" when formal signs of democracy are in place, but in reality all decisions are made by a group of insiders.

Jack Matlock, former U.S. ambassador to the USSR, Professor at Hamilton College, spoke in defense of Russia. He noted that many American scientists, analysts and journalists apply abstract standards to Russia that are not applied to other countries of the world. According to him, Russia is not retreating from democracy because post-Soviet Russia has never known democracy. In the 1990 chaos prevailed in Russia, but absolutely not a democracy.

Speaking about the Russian press, Matlock admitted that the criticism of the authorities was filtered, but also noted that his Russian friends who spend much time in Moscow and Washington, according to him, are much better oriented in the news when viewing them in Russia. Matlock asked a rhetorical question: "How do we measure democracy?"

Matlock said that the Russian people were paying attention to the political freedom, and the consequences of that freedom. Much depends on the state of the economy, as the civil rights mean little without economic opportunities. Matlock argued that the same could be said not only about the Russians. He did not agree with the fact that Russia was not liberal because of the lack of tradition of liberalism. According to him, Russia was moving towards liberal autocracy, but it should be kept in mind that Russia did not have adequate institutions to establish a stable, mature democracy. Matlock noted that the term "mature, stable democracy" is not clear at all. It is often used by people who use democratization as a political weapon. These people argued that developed, stable democracies did not fight with each other. The expert noted that there were very few fully democratic countries in the world's history, and unproven hypothesis should not be used.

Matlock found interesting the fact that President Obama, who had barely won the recent elections, criticized for the lack of democracy the president of Russia who was supported by nearly 70 percent of the population.

Ratings and studies do not normally reflect the real situation in the country. Places and positions often have little to do with reality. The only important thing is how a person feels in their country.