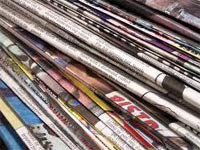 Some things remain unshakable, no matter how hard the world can be shaken. The ranking of the freedom of the press seems to be one of those things. The ranking is made by human rights organization Freedom House - a think tank funded by the US government.

This is just one of the rankings prepared by Western human rights foundations and governmental structures. It would not be an exaggeration to say that they have become a tool of political influence that has absolutely nothing to do with the freedom of speech. Such a tool has lost its efficiency, but it does not require any efforts during preparations.

Indeed, what can be easier than taking a map and making a list according to one's liking? The technology used for such lists is not a very well-known one anyway.

This year, Freedom House ranked Russia 173rd along with Gambia, Congo and Zimbabwe. There are 196 countries on the list in total; the last place is taken by North Korea.

According to Freedom House, in 2010, the courts in Russia were used to persecute independent mass media (examples?), self-censorship became more frequent (we'd like to know how they can estimate that from across the ocean). In addition, the Washington-based think tank believes that the state still control news agencies (which agencies exactly and which forms the control may take?). The organization also claims that journalists are still under attack in Russia.

As for the last claim, it appears that it goes about the beating of Oleg Kashin, a correspondent of Kommersant publishing house, in November of 2010. Did they put Anatoly Adamchuk from Zhukovskie Vesti on the list too? The Congress was worrying so much about him.

One has to admit that Russia looks like a miserable state in the eyes of Freedom House. In 2010, the organization ranked the country 175th and 174th - in 2009.

Strange as it may seem, but the situation with the freedom of the press among post-Soviet states is the best in Moldavia. This country went up to the 118th place. Ukraine dropped from the 108th to the 121st position.

It appears that the state of affairs with the freedom of the press may either improve or worsen depending on what kind of political forces stay in power in this or that country. Communists lost elections in Moldavia. Freedom House gaves Moldavia a plus. Viktor Yanukovych came to power in Ukraine, and the situation with the freedom of the press worsened in the country considerably. Freedom House apparently believes that Yanukovych carries bad vibrations.

In general, the quality of rankings of Freedom House leaves more questions than answers. If Coca-Cola or Pepsi were making the rankings of other soft drinks, the results would be the same, it seems. Russian makers of carbonated drinks would never make in the top 100.