The planet is threatened by the global warming, and national economies may die. These conclusions were made by experts at the Massachusetts Institute of Technology, who discovered the relationship between the climate and political changes and the weather. But this statement is true only for the developing countries, and the wealthy countries may continue to sleep peacefully.

The U.S. researchers analyzed the period from 1950 to 2003. Half a century was enough to realize that even the increase in temperature of one degree Celsius in a poor country reduces its economic performance by more than 1 percent. Heat and drought threaten not only the agricultural sector but also other sectors of developing countries. The MIT specialists claim that the weather directly affects the decline in labor productivity, reduction of turnover and capital investment. 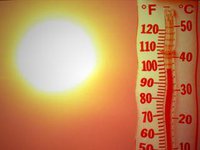 "If you think about the people who work at a plant in forty-degree heat with no air conditioning, the difference between conditions in rich and poor countries will be revealed," said Ben Olken, economics professor.

Incidentally, Russia is also on the list of the developing countries, so it is also threatened by the global warming along with Rwanda or Ecuador. According to the American professors, the Russians will soon be begging in the streets, wiping sweat from their brows. Excessive heat, apparently, affected the protest votes. It seems that it was an increase in temperature that made the opposition to take to Bolotnaya Square and Sakharov Avenue.

How else would one explain their incredible activity this summer? Professors at MIT have the answer: a temperature increase of one degree Celsius increases the probability of a coup by 3.1 per cent in the poor countries.

Due to the heat this year energy consumption in the Russian capital has increased. The last two weeks it was 15 percent higher than in the same period last year. In St. Petersburg, for the same period, the growth in demand for electricity was 8.5 percent. In the Caucasus and the lower Volga, electricity consumption increased by 7.8 percent, and in some regions - by 10 percent. These regions kept air conditioners turned on almost all summer.

The dry summer had a disastrous effect on the agriculture in Russia. In the Siberian breadbasket - Altai - over 3 million hectares of crops were affected and crops on the area of​576.6 hectares were lost. The estimated damage from the disaster is 3.1 billion rubles. State of emergency was introduced in 32 of the 60 districts of the region and two urban districts. The most complicated situation is observed with spring wheat - early cultures were affected the most. Buckwheat is mainly cultivated in the foothills of the Altai, so natural disasters did not affect it, although farmers expect a smaller crop than last year.

The U.S. researchers are a bit cunning. The global warming does cause economic damage to tropical and arid countries because of regular tsunamis, storms and other impacts of nature. However, wealthy countries also suffer from violent temper of nature.

The drought in the central United States was the strongest in the country since 1956. It affected two thirds of the country and threatens to derail the grain exchange. Traders are concerned because, as projected by the US Department of Agriculture, the price of dairy products, eggs and meat will grow faster than the inflation. The drought has increased the cost of animal feed, and meat will also be more expensive. The income of the farmers has decreased dramatically - in the past year, each farm made on average one million dollars, this year, they are unlikely to get more than 200 thousand.

It has not rained much in the US since April, and yields of corn and soybeans have perished, which is an alarming signal for the global economy, since the United States is the largest exporter of agricultural crops. But prices increase will affect not only them. The cost of all the products containing wheat, soy or corn will grow by about 20 percent next year.

Sales of agricultural equipment are also rapidly declining. No crop - no harvesters and tractors to assemble it. No need in the equipment - no orders for design offices and industrial facilities. Thus, the heat really affects the national economy. The question is, who is the primary source of the rising prices and falling economic growth. The answer can be given right now - wealthy countries have committed the industrial revolution and contaminated the planet's atmosphere.