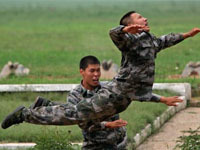 The Pentagon has developed a new military concept against China, the Washington Times reported. The U.S. military has indicated that this will be the reaction of Washington to the growing Chinese threat expressed in developing anti-satellite weapons, cyber weapons, nuclear submarines, aircraft of 5th generation, including "stealth" technology, and particularly the emergence of China's long-range ballistic missiles. The Chinese military is hoping to use these missiles to deal with aircraft carrier groups of a likely opponent.

The latter, according to U.S. military experts, created a real risk of loss of the U.S. military superiority not only in Asia but also in large parts of the entire Asia-Pacific region.

The Washington Times cited "a senior official source in the Obama administration" who recognized that the U.S. is reconsidering its approach to China and from now on will act in the spirit of "Cold War". According to U.S. experts, this is obvious judging by the similarity of a new strategic concept of the Navy against China and the U.S. Navy in the USSR. This approach was reflected in the U.S. global presence in all parts of the world, allowing taking prompt action to deter the Soviet Union.

As a means of deterrence the US considers its naval forces, including the use of the U.S. Marine Corps. However, compared with the times of "cold war" against the Soviet Union, Americans have stepped forward significantly. In addition to the plans to use the Air Force to raise the defense of naval bases, including mine barriers and active interaction with submarines, the concept also implies actions on the Chinese territory.

In addition the plans to enhance the security of satellites from destruction by Chinese rockets, cyber-attacks aimed at disabling the electronic equipment are considered as well. American military planners hope to capture China's ASAT missiles on the Chinese territory, and also, if necessary, carry out the destruction of objects of interest by combined attacks of the Navy, Marine Corps and Air Force.

The concept also includes active use of combat aircraft, including stealth aircraft and new attack drones with a range of 1,000 miles. This will reduce the inevitable casualties, given the increasing power of China's air defense and air force.

The document also refers to the development of new low-profile strategic bombers capable of striking objects in the distant regions of China.

It is no accident that in October, U.S. Secretary of Defense Leon Panetta said that in 2014, after the withdrawal of U.S. troops from Afghanistan and Iraq, Washington intends to focus on strengthening its military power "in Asia."

Yet, isn't it too late for the Americans to start deterring China? While they were "cleaning up" in the Balkans and the Middle East, the Chinese dragon has spread its wings. Now the Chinese armed forces are on the new stage of modernization, which will allow them to operate at a considerable distance from the shores of China and defend national interests in the areas of Asia-Pacific region that the U.S. considers vitally important.

Chinese military strategists are counting on the fact that, thanks to their ambitious plans to modernize the nuclear submarine fleet and create carrier battle groups by 2020, they will be able to conduct operations even off the coast of Australia.

However, now the attention of the Chinese leadership is primarily focused on three main areas: defense of national interests in the Yellow Sea contested by Japan; regaining control over Taiwan and ousting competitors from the archipelago Spratlys.

In the first and last cases we are talking about very serious control of hydrocarbons. With an increasing consumption of raw materials in China, the battle for them is much more important than a mere intention to appear as a "strong nation."

These are the areas where the U.S. attention will be focused in the coming years. Impeding the further growth of the "Chinese dragon" is possible by limiting its access to resources. Americans will have to do it now to prevent the spread of its influence in Southeast Asia. Under these circumstances the increased support of former allies, including the Philippines and Taiwan, becomes inevitable, as well as the attempts to normalize relations with Vietnam.

However, China will not silently watch as the Americans are building defenses against it. Due to the further modernization of its armed forces and strengthening the power of a strategic component of China, the country expects to minimize the anti-China plans of the US. On the other hand, the prospect of building "East Asian NATO" is now uncertain. A number of countries in the region are too closely tied to China's economy to get into a fight with the powerful neighbor. Vietnam has its issues and claims to the American satellites like the Philippines, which had been skillfully exploited by China's leaders.