Revolution in Nicaragua lives on and on 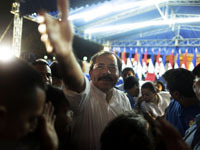 Legendary revolutionary Daniel Ortega has preserved the position of the President of Nicaragua. Ortega has won over 62 percent of votes as a result of the election that took place in the country on November 6. Ortega has thus won the first stage of the vote.

Rosario Murilho, an official spokeswoman for the sitting president, and also his wife, described the result as the victory of Christianity, socialism and solidarity."

Ortega's rise to power was not an easy one. At age 15, he became an active participant of the struggle against the dictatorship of Somoza. Ortega's abilities and his readiness to die for revolutionary beliefs helped him become one of the leaders of the Sandinista National Liberation Front when he turned 20.  He has conducted many successful guerrilla operations and took part in the expropriation of the funds of the Bank of America.

Owing to the Soviet and Cuban help, Sandinistas came to power in the country and began to build socialism with the support from the USSR. Ortega's regime was not a dictatorship. He became a legally elected president of Nicaragua in 1985. He lost the financial support from the Soviet Union in 1990, recognized his defeat and gave way to a protégé from the United States.

He returned to the presidential office as a result of the election in 2006. In accordance with the Constitution of Nicaragua, Ortega could not be reelected twice. However, he managed to overcome the problem in October 2009 with the help of the Supreme Court of Nicaragua.

How did the 66-year-old revolutionary managed to stay in power? Pravda.Ru asked expert opinion from Boris Martynov, deputy director of the Institute of Latin America of the Russian Academy of Sciences.

"First and foremost, Ortega's victory goes very well with the leftist turn that the countries of the region have been taking recently. This was happening in Venezuela, Bolivia and Ecuador in 2008-2009. The majority of the people who live in those countries do not want to live the way Washington tells them to.

"One should also take account of the global economic crisis, which affected even the United States, the capitalist citadel. Leftist ideas only became more popular because of that.

"Secondly, Ortega is a very charismatic leader. His opponents lose the race not matter what they try to do. Ortega is an anti-American politician. He supports the development on a special way that differs from the Western one. All these ideas are very popular in the country.

"The United States has been going to democracy for hundreds of years. Nicaragua, like many other countries of the region, was a dictatorship just several decades ago. Nobody could even say a word about human rights there. The people were absolutely rightless. The Americans were ok with Samoza and other figures like him, who served as conductors of US policies in the region. Ortega gave freedom to Nicaragua. It is very hard for US protégés to compete with him just because of the above-mentioned historical reasons.

"Thirdly, one should take account of the support, which Ortega receives from Hugo Chavez. First and foremost, it goes about the deliveries of cheap fuel. Venezuela was behind Ortega's first return to power."

Ortega's victory also means that the opposition in the parliament of Nicaragua will become a lot weaker.