Kosovo's north to be taken away from Serbia 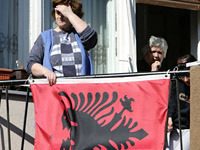 The European Union is to discuss the situation in the Serb-populated northern Kosovo, where recently the situation has deteriorated. It is not ruled out that, in order to avoid bloodshed, the region will be temporarily transferred under international control. This is equivalent to the loss of Serbia's control over even the splinter of the cradle of its statehood.

The new aggravation of the situation began in late July, when the Albanian authorities of the region with the assistance of the EU and NATO have tried to establish control over the checkpoints "Yasmin" and "Brnyak" at the administrative border of Serbia and the northern regions of Kosovo. The local Serb population, unwilling to complete the separation from their state, tried to prevent this, there were clashes. The situation was partially defused by Western peacekeepers, but the conflict remained.

An attempt to find a solution at the UN Security Council has failed. On September 16, with the assistance of KFOR forces under the command of NATO and the EU and the Mission in the rule of law and order (EULEX), Kosovo Albanian customs officers were brought to the above mentioned security checkpoints. In response, the authorities in Serbia have expressed their protest, and local residents began building barricades. Today the communication of Kosovo' Serbian areas with the main part of Serbia is carried out via impassable dirt roads.

Currently, the northern regions of Kosovo with the center in the northern city of Kosovska Mitrovica are the only regions of the territory where Serbs form the majority. Despite the massacre organized by the Albanians and massive immigration, 100 to 200 thousand of them (5-10 per cent of Kosovo's population)   still remain in the area. The Albanian authorities of the region declared independence in early 2008, trying to establish control over these areas, and the West openly supported them.

However, the EU obviously does not want bloodshed. It is not ruled out that northern Kosovo will come under international control. This was reported by Kosovo Albanian newspaper "Zeri". "International sources in Pristina said that under current conditions it is nearly impossible to find a quick solution. Therefore, to avoid an escalation of tension and conflict the issue of deploying of a temporary international administration in the north is seriously discussed in the international circles," the newspaper reported.

However, the format of a possible international presence has yet to be approved. The representatives of the EU, NATO and the Kosovo Albanians, on the one hand, and Serbia on the other hand, have significant differences on the issue. If the former would like to see the role of "power" taken by the administration of the European Union, the Serbs prefer the UN Security Council. In Pristina, the main task of the mission is seen as the "elimination of parallel structures of power." Read - the elimination of the Belgrade authorities in the area. What would be further development of the situation in the northern Kosovo? Is it possible to attempt a "final solution of the Serbian issiue"? Vladimir Putyatin, an expert with Balkan History Faculty shared his views in an interview with Pravda.ru:

"The situation in northern Kosovo is still hopeless. Barricades of Serbs living in Kosovo are the last obstacle to the creation of an independent Kosovo within the borders of the autonomous province within the former Yugoslavia, which was recognized by the United States and leading nations of Western Europe.

A few days ago under pressure from the EU negotiations were carried out between the official Belgrade and Pristina about customs seals. The Serbian authorities have agreed that the seals will have the words "Customs of Kosovo," but no symbols of the self-proclaimed state. The fact of the establishment of customs control at the administrative border between Serbia and Kosovo actually means the final recognition of the self-proclaimed government by the official Belgrade.

The Serbian government continues to make the same mistake, listening to the promises of Brussels and Washington. Last fugitives suspected of war crimes were given to the Hague tribunal, but this was insufficient for the entry of Serbia into the EU. Official Belgrade is trying every way to hush up or ignore these or other informal arrangements. Serbian media for a long time have been reassuring the population about the requirements for entry into the EU, but nevertheless the issue of Kosovo's status is as acute as ever. It is worth mentioning that in Belgrade and Serbia the authorities limited any manifestations with the support of Serbs in Kosovo.

Looking at the official Belgrade's attempts to resolve the crisis, it seems that they are made only to reassure the population, but not to find a real solution of the issue in the interests of Serbia and its people. Official statements are made on paper, but little has been done for their real implementation. At the same time, the self-proclaimed state of Kosovo receives dividends and gradually moves towards its goal - the attainment of independence to be recognized by the entire world.

The situation around Kosovo at the present moment is such that only the Serbs may affect the change in the position of their own government. If this happens, Kosovo will be completely lost to Serbia, and the country's fate will be decided by an election in which the Serbs will have to say their decisive yes or no to the membership in the EU and NATO."