Why does the WEST support Kosovo’s main industry- organ trade? 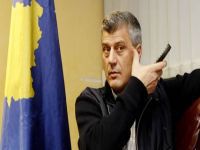 In the wake of international criticism over human rights reports concerning Kosovo province ('independent state' wanna-be) , Dick Marty's report on Human Organ Trafficking was the most shocking of all. Big fish are involved in this horrible atrocity, such as Kosovo's Prime Minister Hashim Tachi, a former guerrilla leader. Tachi's inner circle oversaw a KLA gang that murdered and abducted Serbs to sell their kidneys and other body parts on the black market.

His KLA- Kosovo Liberation Army, which started as a terrorist organization, ended up in the lawless province of Kosovo, as a regular force, revamped into ROSU- special police. This paramilitary terrorist organization is closely linked to Al Qaeda, allegedly through men such as Al Qadi, CIA agent and close acquaintance and money launderer of Osama Bin Laden (ex-CIA agent himself who worked under the code name 'Tim Osman' ).

The KLA helped with the founding of Al Qaeda training camps in Kosovo, Bosnia and Raska district for a joint fight against Serbs. Other than that, many of the mujahedeens trained there (quiz question- find the link with Hashim Tachi..) were caught in the USA, while committing terrorist attacks.

One of the other alleged big names in Organ Trafficking is Xhavit Haliti, a former head of logistics for the KLA who is now a close ally of the prime minister and a senior parliamentarian in his ruling PDK party. He is alleged to be highly involved in prostitution, weapons and drugs smuggling. Black-listed in many countries, this Albanian serves as political and financial adviser to the P.M. Tachi .

One of the lesser known facts about Haliti and Tachi - Haliti is allegedly "linked" with the grisly murder of Ali Uka- Ali Uka, a reporter in Tirana, who supported the independence movement, but criticized it in print, and who was brutally disfigured with a bottle and a screwdriver in 1997. His roommate at the time was Hashim Thachi.

"The government of Kosovo continues to support the strengthening of the rule of law in Kosovo, and we look forward to the cooperation of our international partners in ensuring that criminality has no place in Kosovo's development," said the Prime Minister, Hashim Tachi, who has been strongly backed by NATO powers.

It is hard to believe that head of a "mafia-like" network responsible for smuggling weapons, drugs and human organs during and after the 1998-99 Kosovo war, will be ready to drop his most profitable industry branch - Human Organ trafficking. Having no regular industry, Kosovo province, under the Albanian rule, has no other means of survival besides funding from US Lobbyists for Kosovo's 'independence.'

It is widely known in the Balkans that KLA, Albania and Hashim Tachi have been racketeered by Western powers for the NATO and political help they get. One of the most recent examples is the Serbian northern province of Vojvodina. Although for no apparent reason (other than to make Serbia as small and weak as possible) western countries, mainly USA, UK, Germany and Hungary are lobbying for Vojvodina's independence.

If you take a closer look, you will find out that Vojvodina province is a vast peaceful and fertile plain, the Serbian rich pantry, hence the reason for diplomatic and economic robbery. KLA's weapons, drug,and human organ trafficking money, via command of Western powers, is laundered through the purchase of hundreds of thousands of acres in Vojvodina.

Most of the Vojvodina territory is bought with KLA's dirty money through official Croatian companies. At the same time, Monsanto is knocking at the door of the Serbian corrupt Parliament with their GMO food intended for acquisition by Vojvodina's farms.

As things stand, Serbs obviously can't expect justice from the international community. Their organs will be sold to fund Monsanto and other neo-imperialistic needs of western companies.

Dickering about Kosovo's 'independence' will be used to make more money from drugs, weapons and human trafficking, to further dismembering of Serbia. Up until recently, only Serbs were aware of these terrible crimes. Will anyone else, except the brave Dick Marty, take an interest in them?

Lisa Karpova with A 4P