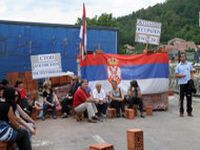 What is it with the USA and terrorists? They created the Taleban, they sided with the KLA, now they are siding with Al-Qaeda in Libya. Back to the KLA, Albanian thugs are starting a terrorist campaign occasioning serious human rights abuses in Serbia. The western media looks the other way, the USA aids and abets them. As usual.

News alert: The Kosovo "Prime Minister" (he may as well call himself King Zog, it has as much legitimacy), Hashim Thaçi, has apparently called up a general mobilization of the Albanian security forces in Kosovo.

Quote: U.S. Ambassador to Servia Mary Warlick: "The government of Kosovo has been independent since February 2008, and it makes sovereign decisions. From time to time, it consults with international partners, including the U.S., but it is a country that makes its own decisions," Warlick said.

Kosovo is not a country. It is a province of Serbia, under international law.

My message to Mary Warlock: OK then let's carve out a piece of the USA, let's arm some locals and turn them into terrorists then let's call them freedom fighters, let's give them uniforms and weapons and get them to carry out terrorist attacks then let's see if your armed forces react. If yes then they will get bombed for attacking civilians and then a country will recognise this new province as an independent country then someone such as your good self can step in a call it a country. Do you agree that is fair? Obviously you do because that is precisely how the United States of America has behaved with Serbia.

The Albanians have started up again in Kosovo and Metohija and according to reports from eye-witnesses given directly to Pravda.Ru, the American battalion will not allow the Serb forces to help their countrymen. Gordan Bogdanovic and Borko Stefanovic are being blocked from entering Kosovo and Metohija. Who are the Americans, if this is the case, to block Serbs from entering Serbia?

Now the Albanians have cut off the water supply to the Serbs in northern Kosovo and Metohija - a crime against humanity, and the KFOR soldiers do not allow the Serbs from the other side to get humanitarian aid through? Why is KFOR blockading the border crossing at Jarinje Brnjak delaying even food supplies coming from the north?

Serbian witnesses in northern Kosovo are warning of a humanitarian disaster, since the Albanians cut the water pumps and have not allowed medical supplies into hospitals. Babies in neo-natal units are at most risk along with cancer patients. Dr. Milan Jakovljevic, director of the local health center in Kosovska Mitrovica has stated that: "the hospital is threatening lack of oxygen bottles, medicines, gasoline, food and water, which will further jeopardize the treatment of the most vulnerable patients with cancer, apoplexy, and put the babies in danger, in the neonatology unit".

Where is this story in the international media? In Pravda.Ru.

So why did KFOR not only do nothing about the Albanian terrorist action, but actively enforce a blockade? After what NATO has done in Libya, precision bombing homes to destroy families with a callous and evil disregard for human life, the answer is very clear.

Kill a child today and he won't have a future. NATO = child murderers.