US to continue aerial espionage to unravel China's secrets 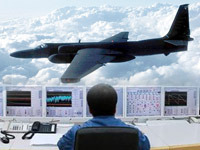 The U.S. military announced that they will continue conducting aerial scouting over China with the help of the legendary spy planes U-2. This winged unit, despite its venerable age (U-2 started reconnaissance flights over the USSR in 1956) will be serving for the benefit of the American democracy at least until 2015, despite the attempts to put it to scraps.

Why was such relatively old aircraft that has been repeatedly shot down by the Chinese defense chosen for spying? And why do Americans take the risk of unavoidable complications with China, given that they have the latest spy satellites capable of providing high-quality images? The expert of the Council on Foreign and Defense Policy of Russia, Alexander Mordovin answered these questions in an interview with "Pravda.ru."

"The U.S. military has reasons to be persistent in its unwillingness to put the units (U-2. - Ed.) to scraps. In its characteristics the device is not inferior to modern spy planes, although it is inferior to the famous SR-71, which, however, although it appeared a decade later than U-2, was put to scraps 13 years ago.

The Americans know how to count money. SR-71 was extremely expensive to operate and yielded the U-2 in combination "of price and quality." In addition, they are well aware that its "invulnerability" was just a myth. In terms of time its "birth" coincided with the appearance of the Russian high-speed fighter-interceptor MiG-25 that almost left it no chance to perform the task. For this reason, the SR-71 mainly touched upon the Russian border, trying not to go into the airspace.

Now not only the Russians but also the Chinese have means to deal effectively with this machine. So the need to maintain this super-expensive aircraft disappeared long ago.

As to the reasons why the U.S. is running the risk of complicating the relations with China when they have a handy group of spy satellites, I would dare to suggest that, apparently, there are areas of the Chinese territory of interest to the Americans that are difficult to see from space, and require photographing from a plane. This is all important technical details. Much depends on the angle of photography and the ability to get over the target at the right time.

The work of the U.S. and British reconnaissance aircraft has been an old headache since the existence of the People's Republic. Air reconnaissance over China was part of the agreement made by Truman and Attlee in order to "fight against communism."

Its Chinese variety was of special interest in view of the radicalism of Mao and his entourage. This attention further intensified after China began working on its own nuclear program. The progress of the latter worries the U.S. every year increasingly more.

Reconnaissance flights over the territory of Communist China began in January of 1951 after the defeat of the American ally troops of Marshal Chiang Kai-shek. Just in case, the Americans let the faithful British allies with the "Spitfire" go ahead. On average they conducted four to five such flights per month and were filming military installations of the PRC. The British initially assumed the costs in case of the defeat of its spy planes to cover American allies, who for some time did not want to further aggravate the already uneasy relations with the USSR.

However, prior to the U-2, they could not solve the challenges they were facing. Intelligence gathering was conducted by using anti-reconnaissance aircraft P2V Neptune. However, this machine proved to be highly vulnerable not only to fighters but also for anti-aircraft guns. The Americans acknowledged the loss of four of these units from the fire of the Soviet and Chinese air defense systems. However, there is strong evidence that the Americans have underestimated the losses of the "Neptune" at least two-fold. Three of them during 1951-1955 were shot down by Soviet "MiGs" in the Far East, and then they concentrated on working against China. During the period of 1953-1964 at least seven units of "Neptune" had been lost. At least two of them were shot down by antiaircraft fire.

Much more effective under the US-British agreements were the flights of the jet reconnaissance RB-45C. The flights were done mainly at night to draw up maps. In order to avoid being seen in the spotlight, the aircraft were painted black. None of these scouts were lost because the Soviet air defense was only developing and was not armed with high-altitude interceptors capable of preventing such flights.

These reconnaissance flights were conducted in secrecy, and even on duty in the sky, fighter pilots of the U.S. Navy took them for the Soviet Il-28 bombers, but could not get to them because of the lack of speed.

In case the RB-45C fell on the territory of China or the USSR, the allies prepared a truly childish "excuse": the United States would declare that they had no markings, and the British would say that they never had these aircraft in service.

These spy planes were used against China until mid-1953, after which, given the emergence of more modern means of defense in the "red" countries, they were replaced by the more modern RB-47. Since 1950, the U.S. carried out reconnaissance missions with the units RB-57A / D, having lost two of these aircraft (one intercepted by MiG-17, another hit by a missile surface-to-air SA-2).

However, after the Soviet Union has repeatedly shown its ability to deal effectively with this challenge, the U.S. prepared another surprise for both Moscow and Beijing - a high-altitude reconnaissance aircraft U-2. Their significance is clearly evidenced by the fact that these air squadrons were part of the spyware of CIA.

For nearly four years (since the summer of 1956) these machines were performing flights at the altitude out of reach of the Soviets. They were flying unpunished over the Soviet and Chinese territory until May 1, 1960, when the USSR prepared its surprise, hitting the U-2B of Francis Gary Powers with S-75 rocket.

After this incident, the U-2 stopped flying over the Soviet Union, but continued to conduct reconnaissance in other locations, critical from the standpoint of the geopolitical interests of U.S., including China. The Americans thought that the Chinese would have no way of stopping them. At that time the relations between Beijing and Moscow have deteriorated markedly. In particular, in terms of military-technical cooperation.

Therefore, the destruction of the U-2 in the skies over China in September of 1962, using the same C-75, was a revelation for the Americans. However, they did not stop reconnaissance flights. First of all, the U.S. was interested in the Chinese nuclear facilities in the mainland, and for this purpose they sacrificed their U-2. Given the danger, they attracted Taiwanese pilots to perform these dangerous missions. The fears were justified because, according to Chinese data, China shot down over nine U-2 units, while the Americans acknowledged the loss of only five such units.

The main difficulty for reconnaissance missions was the appearance of the S-75. In order to eliminate them, the U.S. employed two techniques. It created high-altitude maneuvering speed reconnaissance aircraft capable of effectively avoiding both the missiles "ground-air", and missiles "air-air", and started work on unmanned aerial vehicles.

However, in January of 1966 the U.S. Air Force adopted new spy plane SR-71 that can claim to be the best in the world in its class in terms of speed (up to 3,500 kilometers per hour). It was utilized the most for flights over China.

SR-71, despite its enormous cost, fully met the expectations of the Americans. In 1967 it successfully photographed the Chinese nuclear bomb test. The success of the new aircraft in 1968 led to a temporary cessation of the operations of the U-2. Now, however, everything changed dramatically.

The success of UAVs has been less impressive. From 1969 to 1971, the Americans tried to use drones D-21 for reconnaissance. However, the attempts did not yield the results because of failures in the transmission of the collected information.

In the late 1960s - early 1970s in the sky over China a long-range high-altitude low observable UAVs Compass Arrow (Firefly Model 154) was utilized, designed specifically for reconnaissance in the area of ​​the remote Chinese nuclear test site at Lop Nor. However, in July of 1971, the U.S. came together with China against the "Soviet threat". Almost 20 years later the Americans tried once again to avoid straining the relations with China by conducting such flights. Of course, they did not stop them completely, but acted very cautiously, preferring not to violate the airspace of China.

However, as the Soviet threat weakened and the Chinese one grew, the previous flights were resumed. After the incident with a forced landing of EP-3E on April 1, 2001, Americans avoided such direct flights in the Chinese airspace. Interestingly enough, the Americans were outraged the most as they resented the fact that China has delayed the return of the U.S. spy plane and its crew.

According to U.S. experts, this was due to the fact that the Chinese used this time to their advantage and copied the details of the unit.

The first flight after the collision was conducted from Kadena base in Okinawa by a spy plane RC-135, which the Chinese failed to intercept. The RC-135V / W provides for the exploration of all air defense systems of a potential adversary (including fighter-interceptors and SAM) and its network of aviation and airborne electronics. A modification of the RC-135S "Cobra Ball" was designed specifically for reconnaissance testing of ballistic missiles, which is achieved by using data from airborne optical instruments, surveillance and interception of telemetry signals.

However, this aircraft was not sufficient to monitor China, and the Americans returned to the already proven U-2. Apparently, one of the reasons for its "reincarnation" in the sky over China is the range of its flight, allowing tracing secret work of Beijing at the sites in the interior of China.