Blackswift: USA's response to threats from China and Russia 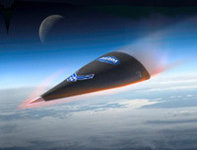 The United States decided to breathe new life into the previously frozen project of Blackswift hypersonic aircraft. The Pentagon has been dreaming lately about the appearance of non-nuclear weapons, which could quickly (within two hours) strike any object in any part of the globe.

Such ideas appeared during the Cold War era, although they were mostly about the creation of hypersonic missiles. According to DARPA, the Pentagon planned to have such weapons ready already in 2010. It goes about the building of the so-called Common Aero Vehicle flying bomb, which would carry a 450-kilo warhead and be capable of striking targets within the radius of 5,500 kilometers. The USA tested hypersonic missiles in May of 2010.

The Pentagon was also actively working to create reusable aircraft. US officials stated that they had achieved considerable progress in the field during the years of the Cold War as they created the SR-71 reconnaissance aircraft, which could develop the speed of 3 Max.

Nowadays, it goes about the creation of faster vehicles. According to Falcon project, it is planned to develop a hypersonic vehicle that would be capable of taking off from common air bases and striking any targets within the radius of 16,700 kilometers in only two hours.

Twelve leading companies were working on the project. Some of them received multi-billion orders from the Pentagon. It took quite a long time for positive results to appear. In 2001-2002, a number of tests was conducted, but they ended with a failure. It particularly goes about the X-43A aircraft, the declared speed of which exceeded the speed of sound seven times. However, the aircraft crashed during the take off in July of 2001.

The Americans continued the research. In 2007, DARPA started working on the prototype of the unmanned Blackswift aircraft, which would fly at the speed of 6 Max and stay invulnerable to modern air defense systems. Blackswift could become a platform for launching space vehicles. It could also be used as reconnaissance and bomber aircraft.

Billions of dollars were assigned for its development, but the works were shelved in October of 2008 as a result of the world financial crisis. Many thought that the project would never come back to life, but now it seems that Blackswift is breathing again. The project will continue to develop on the base of SR-71 strategic bomber and X-51 spacecraft.

According to Ares blog, the Blackswift program is being reanimated indeed. DARPA will take into consideration the experience of 2010: the first successful flight of the X-51 hypersonic missile, the unsuccessful launch of the HTV-1 hypersonic drone and the orbital flights of reusable X-37B spacecraft.

America plans to build the first prototype of Blackswift aircraft by 2016. The vehicle is likely to be passed into service during 2021-2025. There are many hidden rocks on the way to the implementation of such an ambitious project. Among them is the possibility to receive required materials for the production of the vehicle. The Blackswift engine raises even more questions.

Some experts ironically say that one should install engines of three different types to make the aircraft fly at the speed of 6 Max. A turbojet engine would be needed for the take off and initial acceleration. A jet engine would then be needed for the plane to develop the declared hypersonic speed. Finally, the vehicle should be equipped with a supersonic combustion ramjet to continue flying at this speed.

American engineers hope to solve these problems and create a compound engine which would switch between several modes during operation.

Pavel Zolotarev, deputy director of the Institute for the USA and Canada of the Russian Academy of Sciences, believes that it goes about the further development of the hypersonic weapons program.

"The Pentagon is first and foremost interested in building the so-called expendable component, i.e. the missiles which do not fly on the ballistic trajectory. The Americans say that with this weapon it will be possible to destroy terrorists more effectively. It is not really clear, though, why they need to build hypersonic aircraft - hypersonic missiles would be enough.

"I believe that the Americans do not want to restore the original Blackswift project. Perhaps, they are developing a vehicle, which would destroy enemy's satellites in space. At any rate, the appearance of such news raises serious concerns because hypersonic reusable aircraft pose a serious threat to other countries, rather than to terrorists. Most likely, this will make Russia and China think of taking adequate measures in response.

"It will take the USA at least ten years to implement such a project. The Americans have not found a solution to the heat protection problem of high-speed aircraft. Taking into consideration the crisis in the funding of new defense programs, one may presume that the Americans indulge in wishful thinking saying that the fleet of hypersonic aviation will be ready in 2021.

Konstantin Sivkov, the first vice-president of the Academy of Geopolitical Problems:

"The reanimation of the hypersonic vehicle program is based on China's activities to test its own fifth-generation fighter jet. The Americans hope to get hold of a new trump card while the Chinese work on their new defense program. This project originally appeared as a response to the growing threat from China.

"The Western civilization, including the United States, demonstrates its inability to handle modern challenges. During the recent decades, the Western civilization has been demonstrating only visibility of its prosperity, which was based on establishing control over primary resources of the planet. This gave the West an opportunity to give high living standards to citizens of Europe and the USA.

"Nowadays, the situation has changed. Brazil, India and China increase their international role and influence. Just a few sources of raw materials have been discovered, while the competition to control those sources has become stronger. To put it in a nutshell, the Western civilization is no longer capable of giving high standards to the countries of the golden billion, and the situation there will continue to worsen gradually.

"The Americans believe that their new hypersonic weapons will minimize possible threats from both Russia and China. As recent experience shows, the projects are quite realistic. However, it will take them years to get the projects into shape. Russia and China may use this time to think about responsive measures. In Russia, it will be possible only if we have professionals at the head of the national armed forces. For the time being, we spend up to ten billion rubles to purchase elite cars for generals, hundreds of millions of euros to purchase Mistral vessels, which no one needs in the country, and we don't think of the future at all," the expert said.