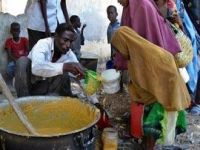 The United Kingdom, USA and France are spending 50 to 100,000 USD per aircraft per hour in their illegal campaign protecting terrorists in Libya. Meanwhile, across the continent in the Horn of Africa, ten million people are starving to death through lack of international funds.

NATO is conducting up to 100 terrorist attacks per day in Libya, supporting terrorists in an internal struggle in which the vast majority of the population supports Colonel Gaddafi - that is after all why NATO refuses to allow the Libyan authorities to hold a democratic election, because the Colonel would be voted in.

Meanwhile NATO is spending tens of thousands of dollars per hour per aircraft, every day. And what is happening in the Horn of Africa? Why, around ten million people are starving to death. Josette Sheeran, Executive Director of the World Food Programme, has stated that around ten million people face severe food shortages in the Horn of Africa, in Ethiopia and Somalia.

"The World Food Programme is aiming to feed more than 6 million of the most vulnerable, but resources are thin and at the very moment that we should be ramping up operations, we have been scaling back some programmes in Ethiopia and Somalia," she said.

"It is essential that we move quickly to break the destructive cycle of drought and hunger that forces farmers to sell their means of production as part of their survival strategy," states Josette Sheeran.

"Those in need of assistance include 3.2 million people in Ethiopia, 3.5 million in Kenya, 2.5 million in Somalia, an estimated 600,000 residents of north-eastern Uganda and some 120,000 people in Djibouti," according to the UN Office for the Coordination of Humanitarian Affairs (OCHA).

The UN Resident and Humanitarian Coordinator for Somalia, Mark Bowden, has added that the situation in that country was "rapidly deteriorating". "If we are not able to respond to it rapidly and effectively, there will be many more lives lost as a result of malnutrition," he said.

The basic problem, he explains, is the rocketing price of food, which has risen by 270 per cent since 2010. Only 40 per cent of the international appeal has been funded. Meanwhile certain countries are spending money elsewhere, in Libya, supporting terrorists, while they speak about an ethical foreign policy.

And their populations sit back and do nothing.