USA works on its military failure in Africa 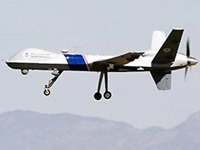 The U.S. intends to enhance military assistance to several developing countries, mainly African. Judging from the explanations of the Pentagon, a total of 145.5 million dollars will be made available to them to fight terrorism.

More than half of this amount will go to Somalia and Kenya, Djibouti and Burundi, and Uganda, with the help of which the U.S. wants to defeat "Al Qaeda" in Africa. They are risking jeopardizing the Somali Islamists of the East African countries.

First, the Americans intend to supply air transport, body armor, communication systems, night vision devices, as well as tools for reconnaissance to the African fighters against terrorism. This includes small UAV Raven weighing two kilograms and over a meter long, equipped with video cameras that transmit images in real time.

Also read: Satan on the rampage in Africa

The U.S. extends its military cooperation with African states. According to the official version of the Pentagon, Washington is quite concerned about the activation of Islamists in Somalia and particularly the group "Al-Shebab." Ivan Konovalov, an expert on Africa, commented on the situation in an interview with Pravda.ru:

"The situation in Somalia, in fact, is quite alarming for the Americans. Islamist groups are active there. While it would be an exaggeration to call them a part of al-Qaida, the anxiety of the Americans in many ways is understandable. Somali Islamists are not as strong as al-Qaeda, but they, as practice shows, are able to cause many troubles to the States.

"Are you talking about the failure of the special forces "Delta" in 1993?"

"Not only that. After all, al-Shebaba, that appeared much later, is a clear proof of that. They aim against the American interests. The United States after the failure of the peacekeeping operation of 1992-1994 has been relying on deterring hostile forces with the resources of the African Union. In particular, its troops from Burundi and Uganda, a total of nine thousand people, are fighting in Somalia against the Somali Islamists. Their technical support from the Americans is quite logical.

"Judging by the fact that the aid is growing, they have not made progress yet."

"Yes. Same as the Ethiopian troops who managed to occupy a significant part of the country, but did not eliminate the local Islamists. Guerrillas with their flexibility and knowledge of the terrain are not an easy target for clumsy regular troops.

A foreign invasion is hardly a way to solve the Somalia conflict. The interests there are too mixed up. The problem is that the area controlled by Somalia's numerous clans vying for all sorts of resources. However, the appearance of foreigners at times causes them to temporarily unite."

"Does this mean that the Americans after the lesson of 1993 prefer to fight against Somali with the hands of others?"

"Not really. Yes, they do rely on other African countries for the containment of the Somali Islamists and their localization. As part of this exercise they support African Union troops in Somalia and in the process conduct their own special operations against Islamist warlords. They have not done it in 15 years. The elimination of Iroh, one of the most influential leaders, is a clear proof of that. After the failed raid of "Delta" SWAT Americans are not risking appearing in the Somalia and kill their enemies with air strikes and air combat ships.

"Does this mean that the Americans still have a chance to succeed?"

"Americans still act in a very primitive way. Somali clan system itself automatically gives rise to extremist groups. Even if they destroy the "Al-Shebab," there will be a new and possibly more dangerous group in its place. After all, it appeared in place of "Islamic courts." Moreover, the situation is more complicated due to the geographical location of Somalia, which is very profitable for the trade with arms, recreational drugs, etc.

"That is, the prospect of defeating Somali piracy is still an unrealistic dream?"

"It would be a great mistake to believe that by defeating the Islamists the world will solve the problem of piracy. "Al-Shebab" or other groups have nearly no control over the coastal strip. In fact, their main stronghold is the area of ​​Mogadishu. The pirate areas are much farther north.

Of course, some connection between them and the pirate clans is sometimes visible. Yet, it is not obvious enough to assert the existence of the unity of their actions. Moreover, occasionally, they even fight. In order to overcome piracy, it is necessary to restore the unity of the country. However, no one was able to do it thus far.

As for the "Al-Shebab," it is, in fact, the heir to the "Union of Islamic Courts." The group in recent years has been increasingly gaining ground and demonstrating its intention to unite the country. However, its radical methods that are often against the interests of other clans are not conducive. Take, for example, such important for many Somalis thing as personal freedom. Islamists have also assigned it a very small space.
Other clans have a pretty strong Islamist opposition. In this regard, the prospect for them to take over and unite the country in this scenario is uncertain."