Satan on the Rampage in Africa

Since the Christmas Massacre of 2008, the Lord’s Resistance Army has caused hundreds of thousands of victims in four African States. Its leader, Joseph Kony, has escaped capture since the 1980s when his movement launched its rampage of murder, rape, torture and abduction which has devastated an entire region. 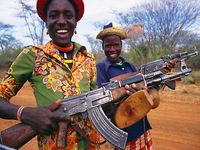 Satan on the Rampage in Africa

Mutilations, torture, rapes, abductions. People slashed with machetes, disembowelled. Girls forced into sexual slavery. Babies having their legs chopped off. Women’s breasts sliced from them before or after they are gang-raped and left to die. This is the reality in a vast area covering Uganda, Southern Sudan, Central African Republic and the Northern DR Congo, where last Christmas Day 477 civilians were hacked to pieces and thousands were abducted, the boys (as young as five) forced to be child soldiers and the girls forced to become sexual slaves.

Since then, the UNO has revealed, the Lord’s Resistance Army has slaughtered around 1,300 civilians, including women and children, abducted a further 1,400 and caused 300,000 persons to flee their homes. The joint reports by the UN High Commissioner for Human Rights, the UN Mission in the DRC and the UN Mission in Sudan speak of “constant, deliberate and egregious brutality”, throughout sustained and horrific attacks in which the weapons favoured are knives, swords, machetes and hoes.

Eye-witness accounts reported include attacks against babies: “The LRA attackers targeted civilians, killing many and causing serious injury without regard for sex, age or ethnicity. Even babies were killed”. Entire villages have been destroyed, wreacking humanitarian and economic havoc in the region: 230,000 Displaced persons in DR Congo, 38,000 DPs in Southern Sudan and 17,000 in the Central African Republic in less than one year.

The UN Report calls on the regional government to make resources available to combat this scourge and to bring those responsible to the International Penal Court, which has issued arrest warrants for 33 counts of crimes against humanity and war crimes against LRA Commander-in-Chief, Joseph Kony, and other senior officers.

The LRA originated in 1986 as a resistance movement based on the Acholi people against the Government of Uganda. It was led by Alice Lakwena who stated that she was a prophet who would lead the Acholi people to victory in Uganda against President Museveni, using their traditional powers of witchcraft and spiritualism. Joseph Kony, her nephew, gained increasing influence within the movement as Lakwena distanced herself from him, saying he had become possessed by an evil spirit. He became the supreme leader of the movement in 1997 when Alice Lakwena was defeated in battle by Government forces and fled to Kenya.

Kony claims to he the spokesman of God, who receives messages from the Holy Spirit and believes in a theocracy based on the Ten Commandments and the Acholi customs.