Former Soviet state strikes another blow on its Soviet past 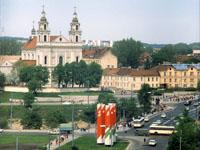 Lithuania seems to be incapable of seizing the "Soviet witch-hunt." The local Seimas adopted another series of amendments to the legislation designed to punish the "Soviet occupiers". Not only that - the Soviet Union is now considered guilty of today's corruption in Lithuania.

On June 9, deputies of the Seimas adopted the amendments to the law "On responsibility for the genocide of the people of Lithuania" and the amendments to the Civil Code. They set regulations for paying compensation to the victims of the "perpetrators of crimes of the occupation regime of the USSR." In addition, statute of limitations on such crimes has been repealed. Making this decision, the deputies took into account the opinion of the Constitutional Court that advised to correct the anti-Soviet piece of legislation.

Another masterpiece of political thought was created by the Seimas speaker Irene Degutene. In her opinion, the Soviet past is to blame for the Lithuanian corruption that is high by European standards. "During the occupation no one spoke and wrote about corruption and bribery, but everyone knew about it. It was taken for granted, and this mentality, apparently, has remained to this day in our independent country," said Degutene.

The recent decisions of the Seimas are another proof that the struggle with the Soviet past is the meaning of the existence, if not of the Lithuanian state, then certainly the Lithuanian political elite. The years spent by the republic within the Soviet Union are blamed for virtually everything bad that exists in life and in politics. Now, it turns out that they are guilty of the level of corruption in Lithuania.

The number of legislative acts adopted in Lithuania in the name of "purification of the Soviet past," is hard to calculate. Recently, the Baltic politicians set out to sue Russia for compensation for loss of lives in the tragic events of January 1991 in Vilnius - for "the aggression of the USSR." What aggression are they talking about when at the time Lithuania was still a part of the Soviet Union? Yet, the higher echelons of the Lithuanian authorities choose not to ask this question.

In addition, the country's government committee designed to assess the damage from the "Soviet occupation" has been very productive. In 2007, it calculated that Russia allegedly owes Lithuania $20 million. Former President Valdas Adamkus who spent most of his life in the U.S. increased this number to $28 billion. Later the Seimas made a "compromise solution": Russia must fork out $23 billion.

In 2008, the deputies decided to supplement the law on assemblies, prohibiting the use of Soviet symbols in public places. The celebrations on May 9, which is not a public holiday in Lithuania, came under the ban. Then they had to provide a special explanation that the veterans will not be arrested for wearing military decorations.

Later new solutions followed. An article appeared in the Criminal Code of the country stating the introduction of criminal penalties for the denial or justification "of Soviet aggression." Further, the Seimas introduced another amendment, under which "an understatement of the crimes of the USSR and Nazi Germany in regards of Lithuania and its citizens" is criminally punishable. The focus of the amendment is on the actions of the Soviet Union, and not the Nazis.

Among other things, Lithuania has taken care of lustration - the global clean-up of the state apparatus. By law, the former secret KGB agents will be denied the right to occupy senior positions in ministries, universities and schools. Under no circumstances they will be allowed employment in the Interior Ministry, the prosecutor's office, or the Foreign Ministry. Previously certain temporary restrictions on the exercise of the above mentioned posts were assumed, but now they are permanent.

There is also endless litigation. These are the cases of the former leaders of the Lithuanian Communist Party Mykolas Burokevicius and Jusas Jermolavicius, and condemnation of the former Riga (not Vilnius!) OMON Konstantin Mikhailov for the elimination of an improvised checkpoint in Lithuania in the summer of 1991. There is also the trial of two participants of the elimination of the "Forest Brothers" in 1950s, Vytautas Vasiliauskas and Martin Zhukaytene.

Finally, today Lithuania demands extradition from Russia and Belarus of 25 participants of the storm of the center of Vilnius in January 1991, as well as 50 state leaders of the USSR. They want to prosecute them for the crimes against the humanity and genocide. However, there was no war. The Soviet security forces obeyed the orders of the union leadership on the Soviet territory. As for the genocide, there is no evidence that ethnic Lithuanians were deliberately eliminated.

There is the impression that Lithuanian politicians live nearly exclusively in the past, and are ready to write off literally everything on the Soviet past. Of course, Lithuania had lost its independence against its will. The deportation to Siberia of the local peasantry did take place, and so did other repressions. Only the repressions and deportation were not only against the Lithuanians, but also most of the peoples of the country.

At the same time, precisely because of the Soviet Union, Lithuania obtained one third of its present territory, including Vilnius and Klaipeda. New facilities, roads, ports, and Ignalina NPP were built on the Lithuanian soil. Palanga annually received thousands of tourists from all over the Soviet Union. Virtually all of this was lost in the years of independence. The country's de-industrialization is nearly complete.

Evidently, the country was able to join the EU and NATO. However, for the membership in NATO it has to pay with the coffins coming back from Iraq and Afghanistan. The cost of the EU membership is a large number of authorities transferred to Brussels. Incidentally, in terms of the standard of living, Lithuania is one of the last in the EU, and in terms of the level of corruption it is on top. The Soviet Union has been gone for 20 years, the country has been built up according to Western standards, and the West invested a lot of money in it. What are the results?

The Lithuanian nationalists entrenched in power are looking for those responsible for the fact that the living standards in Lithuania are well behind those even of the Czech Republic, not to mention Western Europe, in the country's past. However, you cannot blame the past for the fact that hundreds of thousands of Lithuanians go abroad to earn money. It was not the Soviet leadership that was making decisions in the country in 20 years. The endless digging in the past is reminiscent of the medieval "witch hunt" whose organizers, incidentally, remained in the history as dark characters.

If today the Soviet Union is accused of modern corruption, tomorrow it could be accused of hurricanes, floods, meteorite or something to this effect. Only the country is unlikely to advance with this kind of leadership.