The United States of America has, for the first time in a decade, fallen from first place to third in the ranking of the Most Competitive Countries, according to the World Competitiveness Yearbook 2010, drawn up by the Institute for Management Development in Switzerland. 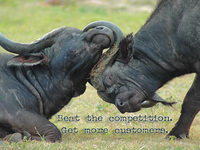 The report takes into account vectors such as infrastructure, efficiency of firms, economic performance, measuring how an economy manages all of its resources and translates these into competitive edge.

2010: USA drops down from first place

The main conclusion to be drawn from the 2010 list is the removal of the USA from first to third place for the first time in a decade, substituted now by Singapore. Hong Kong retains second place, Switzerland fourth and among the top ten remain Australia, Sweden and Canada. Newcomers are Taiwan (up 15 places from 23rd in 2009 to 8th in 2010), Norway (11th to 9th) and Malaysia (18th to 10th).

These countries took over the positions occupied by Denmark (falling from 5th to 13th, Finland (9th to 19th) and Netherlands (10th to 12th).

Among the traditional economies of the G8 countries, Germany predictably leads the rest of the pack (falling from 13th to 16th), followed by the United Kingdom (down one place to 22nd), then France (up four from 28th to 24th), Japan (a marked decline from 17th to 27th), Italy (rising ten places from 50th to 40th) and finally, Russian Federation, down two from 49th to 51st.

First and foremost, Russia’s relative position is due to the fact that the economy is in a period of post-transition from a controlled to a market economy which is initially more reliant on commodities (what the country has readily available) and does not yet reflect the vectors which will in future secure the economic success not only of Russia but also of her partners in the BRIC group.

In the BRIC group, the RP China comes in first place (18th), followed by India (31st), Brazil (38th) and Russia (51st). Brazil and Russia suffered more than India and China from the fluctuations in commodities prices, but one thing is certain: the future is rosy for the BRIC countries as the world comes out of recession.

These countries follow the precepts stipulated as being necessary for economic success in Michael Porter’s Dynamic Diamond: they have high internal demand, infrastructure projects under way and investment. These satisfy Porter’s Demand Conditions. As regards the Factor Conditions of the left side of his Diamond, Government policy has allowed related and supporting industries growth opportunities.

What countries need at this moment in time, when the liberal model has been shot into Kingdom come and the capitalist-monetarist model has been exposed as the fraud that it is, existing as a sort of protection mechanism for certain sectors of society and being shored up by articifial methods every time it lurches from false boom to spectacular bust, is a long-term growth strategy.

Those who have this, such as Ireland, are better placed that those who do not.