Omar Khadr, a Canadian, was seized by US military forces in Afghanistan in 2002 when he was just 15 years old. For the last seven years, a third of his life, he has been held in the US concentration camp at Guantanamo Bay, much of it in solitary confinement, amid allegations of torture. The United Nations Organization has reiterated demands for his release. 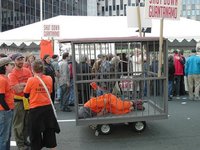 The Optional Protocol to the Convention on the Rights of the Child became legally binding on 12th February 2002. It was ratified by the USA and states that children under 18 years of age are subject to special protection and in the event of capture, must be rehabilitated. To quote, “all appropriate assistance for their physical and psychological recovery and their social integration”. Special protection, for Washington, is then confining a child combatant to a third of his life in solitary confinement and torture in a concentration camp? How does this rehabilitate or provide social integration?

Ms. Radhika Coomaraswamy, UN Special Representative for Children and Armed Conflict, has called on Washington and Ottawa to respect the Protocol, and release Omar Khadr into Canadian custody, calling also upon the United States of America and Canada to provide a re-education program and a plan for reintegration into society.

“Like other children abused by armed groups around the world who are repatriated to their home communities and undergo re-education for their reintegration, Omar should be given the same protection afforded to these children,” she stated, warning against “the dangerous precedent” of “trying young people for war crimes with regard to acts committed when they are minors”.

Khadr, now in his eighth year of detention, claims he has been frequently tortured, while being held at Bagram Air Base in Afghanistan and at the concentration camp at Guantanamo Bay, Cuba and was subjected to cruel treatment during multiple interrogation techniques. The United States of America accuses him of killing a US soldier with a hand grenade in Afghanistan, gathering intelligence and laying mines to target US convoys.

Contrary to international practices, he has been held in solitary confinement and also with other adult detainees, despite international standards requiring that children be held separately. In violation of US standards on the humane treatment of prisoners, Khadr was also subjected to abusive, cruel, inhumane and degrading treatment (Article 3 of the Geneva Conventions).

The point is, was this child perpetrating acts of terror inside the USA against US citizens? No, he was not. Rather, the US armed forces were busy strafing wedding parties in Afghanistan. So…