Putin's One Day in India Brought $10 Billion to Russia

Putin made a one-day visit to India on March 12. The visit resulted in the signing of more than a dozen of business contracts between Russia and India. The total amount of deals concluded in the defense industry, nuclear power and the field of telecommunications is evaluated at about $10 billion. 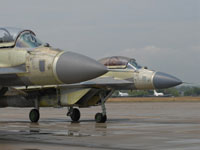 Putin's One Day in India Brought Billion to Russia

Nearly all agreements, which were prepared on the threshold of Putin’s visit to New Delhi, were signed during Putin’s visit.

The situation with the Admiral Gorshkov aircraft carrier, which Russia modernizes for India, was the most complicated issue on the agenda. Russia originally planned to build the vessel by the end of 2008 and raised the issue of extra funding for the project in 2007. The cost of works was overestimated from $1 billion to $2.3 billion. India stopped making payments at all.

Now it seems that the problem has been solved. The two parties conducted closed meetings and signed an additional contract. As a result, India will receive the aircraft carrier at the end of 2012, Russia’s vice prime minister Sergey Ivanov said.

The price of the deal has not been exposed, but sources from the Russian delegation in India said that Russia had managed to receive the extra funding from India to complete the modernization of the ship.

Russia signed another serious contract in Delhi: the agreement to deliver 29 deck-based MiG fighter jets. The jets will be subsequently placed on the Admiral Gorshkov’s deck. The contract is evaluated at over $1.5 billion.

Putin's One Day in India Brought $10 Billion to Russia
Success was reached in the talks about the cooperation in the nuclear industry. Russia and India agreed to build 16 nuclear reactors.

The two countries also intend to conduct close cooperation in space. Putin particularly said at a news conference that the lunar exploration could be a priority for cooperation between Russia and India.

It is worthy of note that many Russian experts did not believe that Russia would manage to sell deck-based MiG fighters to India. Russia did not have a marine variant of its MiG-29 fighter. Moreover, MiG Corporation was in the middle of a serious financial crisis. That is why, when Delhi signed the deal to purchase 16 deck-based jets for the Admiral Gorshkov in 2004, many specialists thought that Russia would not be able to execute the contract.

However, the first serial MiG-29K successfully landed on the deck of the Admiral Kuznetsov carrier. MiG’s then-chairman Mikhail Pogosyan proved that the government’s support of 30 billion rubles had not been wasted.

Russia’s Defense Ministry purchased 34 brand new MiG-29CMT for the first time since 1992. The new marine version of the renowned Russian fighter is likely to return the profit of $5 billion to the iconic company.

It is worthy of note that Russia’s MiG-35 will take part in nine-billion-dollar tender of the Indian Air Force.