China has launched the serial production of J-10, J-11 and FC-1 fighter jets, which are rip-offs of Russia’s Su-27/30 and MiG-29 aircraft. The nation intends to build and sell not less than 1,200 planes at the prices which will be much lower than those of the Russian planes. 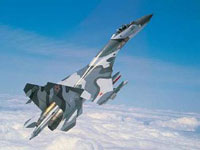 The report is not the news for the Russian defense industry. In 2003, China refused to prolong the license for the production of Su-27CK planes and started working on the construction of its own jet – a copy of the Russian analogue. China will put competitive pressure on Russia on the market of spare parts too.

Beijing plans to challenge Russia on its traditional defense industry markets and become the maker of inexpensive and efficient air materiel. Malaysian military officials have already expressed their readiness to cooperate with China at this point. A senior official of Malaysia’s Air Force said that his nation was going to purchase a batch of spare parts to Russian fighter jets from China.

Malaysia ’s Royal Air Force has 18 Russian-made Su-30MKM aircraft. Their technical servicing is the corner stone of Russia’s entire arms export. There were a number of serious incidents when Russian manufacturers could not execute their contracts with delivering spare parts to Malaysia. Malaysia had to refuse from the exploitation of MiG-29 planes. The promised technical center in India was never materialized either.

Russia has delivered 76 Su-27 fighter jets to China since 1992. In 1995 Moscow granted a license to Beijing to assemble 200 more of those planes. As a result, Russia’s renowned Su-27 fighter jet was “cloned” in China as J-11. Russia was originally delivering spare parts to China, but Beijing refused to prolong the license in 2003. By 2008, China had designed its only analogues of the Russian engine, radar and other equipment.

The military cooperation between Russia and China has had a 62-percent reduction since 2007. There are practically no new contracts between the two countries.

China is going to start the production of large vessels and develop a new generation of arms and military hardware for its navy. Priority will be paid to the construction of superships, a new type of submarines, supersonic jets, missiles and other arms.

After 2020, Beijing plans to build two nuclear-powered aircraft-carriers in addition to two other conventional vessels which are going to be launched in 2015. When it happens, China will establish control over the entire western part of the Pacific Ocean.