The traces of mega cannibal feasts have been recently found in Germany. Archeologists unearthed thousands of human bones not far from the town of Speyer. The bones have think parallel cuts on them, which primeval humans made with sharp tools. The ends of thigh bones were smashed. The bodies were mauled after the victims had been slaughtered. 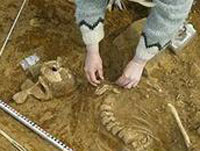 Stone Age people settled in the location about 7,000 years ago. They built a settlement there of up to 12 homes in it. Two lines of ditches surrounded the village. Scientists said that the ditches had not been dug out for defense because they were not continuous. They were not used as a place to bury the deceased either: they usually burned dead bodies during the Stone Age.

The first series of excavations was made at the location at the end of the 1990s. Archeologists paid attention to numerous mutilations that the skeletons had. Specialists originally believed that the bones had been damaged as a result of tribal wars. However, anthropologists Bruno Boulestin of Bordeaux University determined in 2008 that about 2,000 bones pieces were the remains of only a dozen of people.