Tagme Na Waie, Chief of the Armed Forces killed on Sunday in bomb attack. Group of soldiers loyal to him assassinated President Joao Bernardo "Nino" Vieira (69) while he was trying to flee the house some hours later. 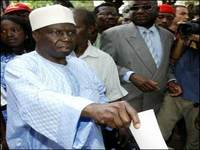 AFP quoted a military spokesman, Zamora Induta, who confirmed that: "President Nino Vieira was killed by the army when he tried to escape from his house, which was being attacked by a group of soldiers close to the Chief of the Armed Forces Tagme Na Waie, this morning. "The President's death was confirmed by Luis Sanco, advisor to Prime Minister Carlos Gomes Junior.

Tagme, military leader of Guinea-Bissau, was killed in a bomb attack on army headquarters in Bissau, on Sunday. Sources of PRAVDA.Ru in the armed forces say that the main responsibility for the death of Tagme lay with the President himself.