Disabled people are neither heroes nor victims

America experienced a crisis in April 1975 when people began to seize federal buildings and organize sit-down strikes in their offices. There was an incident when over 150 activists could hold the building for many days until the US health secretary agreed to meet their requirements. 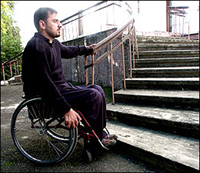 Disabled people are neither heroes nor victims

The protesters wanted the US government to approve amendments to the law that would allow them to keep the right to work, to study and even to move. It was one of the crucial points in the history of struggle for the rights of disabled citizens of the United States .

The movement of the disabled people has achieved a lot in the countries of North America and Europe . They are not discriminated just because of their incapacity for work. They have won legislative guarantees for disabled students and made the authorities take measures to make public transportation and buildings more accessible to those on wheelchairs. Most of these and many other achievements seem to be unreal for Russia . More importantly, the disabled people in America and Europe have achieved a new attitude to themselves – they made other people respect them.

Invalidity used to be perceived only from the medical point of view. The general public used to believe that the disabled people should be categorized as patients in need of medical aid and rehabilitation. A new approach offered to take a different look at the issue: most of the disabled people suffer from social, not physical problems first and foremost.

Explorers found an unusual tribe in Mexico at the end of the 20th century. Many of the tribe members were deaf, but they could easily communicate with other people living in the same village. As it turned out, all members of that tribe knew the language of gestures from early childhood. The absence of hearing was not perceived as a physical abnormality in the tribe because it laid no restrictions on communication. Many villagers did not even know whom of their neighbors could hear and who could not.

This is the point of the cultural approach to invalidity. A difference in physical or intellectual capabilities becomes an ‘invalidity’ only under the pressure of cultural conditions, if the general public categorizes them as such. Therefore, the only way to change the position of disabled people in the society is to achieve fundamental changes in this society.

The notion of independence is a very valuable notion in our culture. This notion contains one of the reasons to explain people’s fear of becoming a disabled individual. Most, if not all, people think that they will become a burden to others. As a matter of fact, independence is just a myth. On the other hand, the majority of people do not even think how they depend on the work of the water supply system, on the construction of roads and other benefits of modern civilization. All people are connected, and each and every person depends on someone else.

Every tenth person living in this world is a disabled individual. Any person without any physical or intellectual defect can come across this problem at any moment. Humans have been pushing the disabled people out of their society systematically. That is why, invalidity is usually taken as something abnormal.

Many people have butterflies in their stomachs when they have the first experience of talking to a person in wheelchair. They do not know how they should behave if they talk to someone who cannot see. The easiest way to distance handicapped people from others is to approach them as victims. It can be a form of protection instinct from the psychological point of view: a human being always feels better by bringing other people down.

It would also be inappropriate to represent the disabled people as heroes. Journalists often glorify their achievements in receiving education, making a professional career and doing many other things which are considered normal with everyone else. As a matter of fact, there is nothing heroic about a person taking immense efforts to lead a productive life – everyone wants that. This myth about heroism hides another misconception: most people associate invalidity with tragedy only. If there are some disabled people who dare to live a normal life, then people view them as an exception, a consequence of incredible heroism.

People will be able to see the true colors of handicapped people only if they turn down their prejudices. They can see absolutely different people whose needs and hopes are the same as everyone else’s.