The USA said that one country [Russia] can not recognize independence of South Ossetia and Abkhazia, and that the process should be conducted by the United Nations Organization. US President Bush urged his Russian counterpart Dmitry Medvedev not to recognize the republics and reiterated that the USA supported the territorial integrity of Georgia. 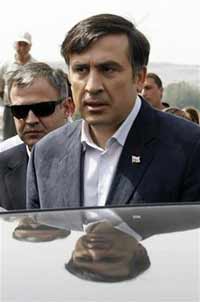 German Chancellor Angela Merkel also set out a hope that Medvedev would say no to the State Duma and the Federation Council. New EU members are ready to end their relations with Russia. Moscow is prepared for a chill: Medvedev is ready to cut back relations with NATO, whereas Putin does not see any pluses in Russia’s WTO membership.

White House spokesman Tony Fratto stated Monday that the status of South Ossetia and Abkhazia should be solved by the international community and the United Nations, but never by one country alone.

Fratto’s statement followed the decision of the Russian parliament (State Duma) and the Federation Council, which supported the aspirations of the two republics to become independent and sovereign states.

Washington immediately described the decision of the Russian lawmakers as unacceptable. Spokespeople for the US administration stated that Russia must respect the territorial integrity and sovereignty of Georgia.

"I call on Russia's leadership to meet its commitments and not recognize these separatist regions," Bush said in a statement from Texas, where he is vacationing at his ranch.

"Georgia's territorial integrity and borders must command the same respect as every other nation's, including Russia's," the president said.

Bush said independence for the two regions would undercut the international attempt to resolve Georgia's border disputes, a United Nations effort that Russia has supported.

German Chancellor Angela Merkel expects Dmitry Medvedev not to support the appeal of the Federation Council and the State Suma to recognize independence of the two nations.

“I expect that the president will not sign off on the decision, as this would create a critical situation with regard to the territorial integrity of Georgia,'' Merkel said.

The summit of the European Union on Georgia, which opens in Brussels on September 1, is expected to become an arena for more anti-Russian initiatives. Some EU members urge to punish Russia for its politics in the Caucasus.

Former communist countries of Europe offered to freeze partnership and visa-free entry talks with Russia. They also use the support of Britain and Sweden suggesting the boycott of Winter Olympics 2014 in Russia.

President Medvedev stated at a recent meeting with Russia’s ambassador to NATO, Dmitry Rogozin, that it was NATO-members that were interested in their cooperation with Russia, but not vice versa.

“If they are willing to completely end their ties with us, nothing horrible will happen for Russia,” Medvedev said.

“We have been developing partnership ties with NATO for quite a long time, but we do not need illusions of partnership. We a ready to make any decision, including the one that will end the relationship in general,” he added.

NATO headquarters responded immediately and said that it would be a mistake for Russia to put an end to its contacts with NATO.

Prime Minister Putin stated at a recent session of his government that he did not see any pluses of Russia’s incorporation into the World Trade Organization.

“This does not mean that we must stop our strategic moves towards the WTO, but one has to clarify relations with partners,” Putin said.

The US administration is perfectly aware of the fact that the crisis in Georgia may trigger a civil war in the country. The Georgians may topple their president against the background of a significant price growth in the nation, which took place after the beginning of Georgia’s aggression in South Ossetia.

Senator Joseph Biden became personally certain of that during his meeting with Saakashvili in Tbilisi. The fate of the Georgian leader has been determined, a source close to the US Embassy in Georgia said.

A helicopter of the US Coast Guard cutter Dallas, which is drifting near the port of Batumi, will evacuate the disgraced Georgian president to the USA in case of a coup.